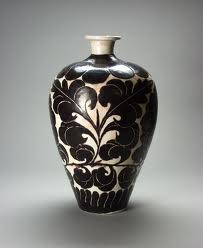 Cizhou is the name given to a number of stonewares, grey or buff, of varying degrees of hardness, with painted, incised or carved decoration on a clay slip. These stonewares were not only made in the region of Cizhou, Hebei Province, but in several provinces of China during the Song, Yuan and Ming periods. The great centres of production were in the north of China in the provinces of Hebei, Henan and Shanxi.

Cizhou wares seem to have been very popular, made for a clientèle of rich merchants, at a period when the paintings of famous artists adorned the walls of tea houses of the capital. While this type of pottery did not apparently attract Chinese collectors of the 18th and 19th centuries, it was much appreciated by the Japanese as a kind of folk art, for its rustic look. Nowadays Cizhou fetch very high prices at public auctions.

In the past fifty years, kilns producing Cizhou wares have been identified and excavated. This has made it possible to know the exact origin of certain types and to study the evolution of the ware.

Song potters used several methods of decorating Cizhou: vases, jars, pots, boxes and pillows. Champleve decoration appears at the beginning of the Song period in Henan at Dengfengxian and at Xiuwu. This method consisted of covering the vessel with a white slip, then carving and incising the design as to expose the brown of the body below. The whole surface was then glazed. After firing, the brown of the body formed a striking contrast with that of the glaze covering the white slip. Sometimes the design stands out against a ground of little circles stamped with a metal or bamboo tool. This decoration was often used on Tang metalwork. A variant of the technique used in the 11th century consisted of incising the little circles through the slip, then filling the lines with brick-red paint. The object, generally a pillow or cup, was then glazed. In another type of decoration called sgraffito, two layers of slip were placed one over the other, a brown slip, for example, over a white one, or vice versa over the parts destined for decoration; then the design was drawn by incising and scratching the upper layer, and the whole thing was covered with a transparent glaze. This technique was used at the Xiuwu kiln in Henan and in Hebei at Guantaizhen, where a large production centre was located.

In all, thirteen kilns have been discovered at Guantaizhen. They contained shreds of a pale-grey stoneware with a variety of decoration: sgraffito, champlevé, grounds of stamped circles or hatch, or simply painted on a white slip and glazed. Pillows in the form of a flower petal, appearing at the end of the Song Dynasty, come from these kilns. They are particularly remarkable for their free-form and imaginative designs.

Among the objects manufactured at Dongaikou, which was another centre of production in Hebei, one should mention the famous pillows with the mark of the potter Zhang, which features in many museums and collections. This family of potters seem to have worked here and Yezi from the early Song until the Yuan period. In the 11th and 12th centuries the potters at this site used a new technique of decoration. The design was painted in black and fired at a high temperature; it was then covered with a green or turquoise lead glaze and fired again at a lower temperature, called muffle firing at around 900 degrees. This green glaze does not adhere well, as it scales off and grows iridescent: the effect is nonetheless highly ornamental. These vases are rare and much sought after.

At the end of the Song and Jin period, pots were painted over the glaze with enamels of a composition similar to that of the Tang lead glazes; they contained a greater quantity of lead and were therefore more fusible. The objects – often bowls, dishes and pillows – were given a slip and then glazed. They were fired at a high temperature and then decorated with green, red and rarely yellow enamels; the object was then fired again in a muffle kiln. The Japanese call this decoration so-akae (Song pottery with red decoration). In fact two so-kae bowls belonging to Japanese museums are dated at 1211 and 1230, suggesting that these red decorations are not Northern Song but Jin period (1115-1234).

The figures, animals, flowers and leaves of Cizhou are always painted very boldly, the line is broad and vigorous, with a freedom attained only by real artists. The flat surfaces of the pillows gave the painters a chance to compose little works of art on a small canvas. Inscriptions were frequent: dates, poems, good luck charms and wishes for prosperity were prevalent. Some pillows were inscribed with the potter’s mark, while others had the name of the family for whom they were made.