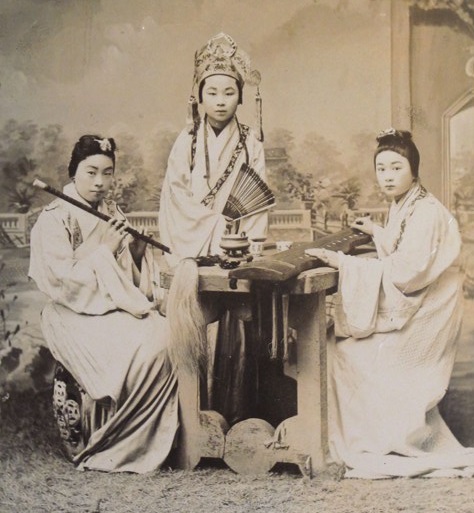 Lot 590 – Three Photograph albums and paperwork grouping compiled by an Imperial German medical officer during his time in China and the Far East 1900-1905.

The albums are oriental style concertina with images on both sides. All three albums have lacquer covers with bone decoration with oriental scenes. The albums appear to start in 1900 when the officer who compiled the archive was on the battleship the Bismark and landed in China during the Boxer rebellion. Images include the ruins of Takau fort, civilians in the streets, the Imperial palaces, Chinese artefacts, posed studio images of Chinese women; some of which are hand coloured.

One of the albums has a series of images showing Chinese civilians with a number of different illnesses including mutation, psoriases, syphilis, leprosy and others. The images remain clear with just some fading to a small percentage in the albums. A small percentage of the album appears to be in Japan but these are hand tinted photographs that you could purchase at the time. The albums are annotated in German but with places such as Peeking, Shang Hai and other smaller rural areas of China.

The document archive part is all in German and appears to give the man’s history including his time in China during the early 1900’s, this was typed probably in the 1940’s. Also a inked written ledger dated 12.11.1900 relating to service in the far east and with the use of photographs, some of which do appear in the albums. Amongst the paperwork is a map of the city of Peeking. 387 photographs in total in the albums and the paperwork archive. (4 items).

Imperial German Naval Photograph Album from SMS Hertha With Far East China Interest Circa 1900 – 1904. Album shows personal photographs of ships in action, guns being fired, officers, men in uniform and then shots of scenery, monument and natives in the Far East including china.

Photographs remain in good overall condition and are housed in a period photograph album. The cap tally of SMS Hertha can be seen being worn by many of the sailors in the photographs.

73 photographs in total. SMS Hertha served abroad in the German East Asia Squadron for the first six years of her career; she served briefly as the Squadron flagship in 1900. She contributed a landing party to the force that captured the Taku Forts during the Boxer Rebellion in 1900. After returning to Germany in 1905, she was modernized and used as a training ship in 1908, following the completion of the refit. She conducted a series of training cruises, and several notable officers served aboard the ship as cadets, including Karl Dönitz and Ernst Lindemann.

At the outbreak of World War I, Hertha was mobilized into the 5th Scouting Group, but served in front-line duty only briefly. She was used as a barracks ship after 1915, and ultimately sold for scrapping in 1920.

Imperial German China 1906-1909 photograph album pair. The albums are of Japanese origin in black lacquer and bone with scenes from Japan.

The first album has inked in German gothic script to the front “Fur Erinnernug an meine Dienstgeit Tsingtau China 1906 1909”. Album is a fold out type and starts with images of German colonial troops on the parade ground moving on to some patriotic cards showing German colonial troops advancing during the boxer rebellion.

Album then shows images of natives either posing with German soldiers or on their own. A couple of the images have been hand tinted. The second album appears to be mostly images of boats and scenes in Japan. The second album pages have mostly come loose from the album covers. 90 images. (2 items)