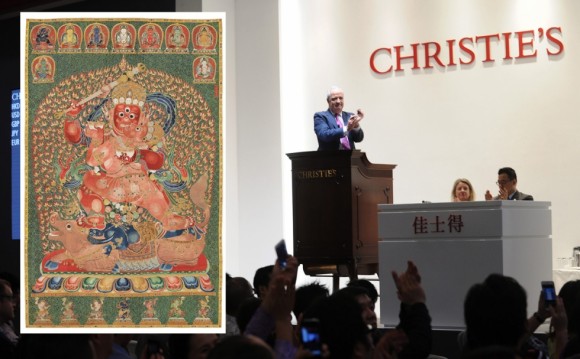 After sweeping media headlines in spring with his HK$280-million ($36 million) purchase of a Ming Dynasty (1368-1644) “chicken cup,” Chinese collector Liu Yiqian has grabbed the public’s attention once again with his purchase of a Tibetan Buddhist embroidered silk picture, or thangka, for HK$348 million at a Christie’s auction in HK on Wednesday. This was not only a rarely seen high bid by a domestic collector, but also a record for this type of Tibetan art.

Originally estimated at HK$80 million, the thangka dates to the reign of the Ming Dynasty Yongle Emperor (reign: 1402-1424). Thangka from this period are extremely rare and precious. According to Christie’s, there are only three known Yongle period thangka remaining in the world, the other two being located at the Jokhang Temple in Lhasa.

“This thangka has great artistic value,” said Tsang Chi-fan, head of the Chinese porcelain and art work department at Christie’s. According to Tsang, the huge thangka (3.1 meters high and 2.3 meters wide) is so well preserved that its colors are just as dazzling as they were when it was first made. More importantly the workmanship on this thangka is especially exquisite, combining the best silk material from Hangzhou and the top handiwork from Suzhou.

Liu’s thangka was lost in the West during the 1940s and first appeared on auction at Christie’s in 1977, where it was sold to an Indian collector for 7,000 pounds.

It was auctioned twice after that with the bid in 2002 reaching $4 million. 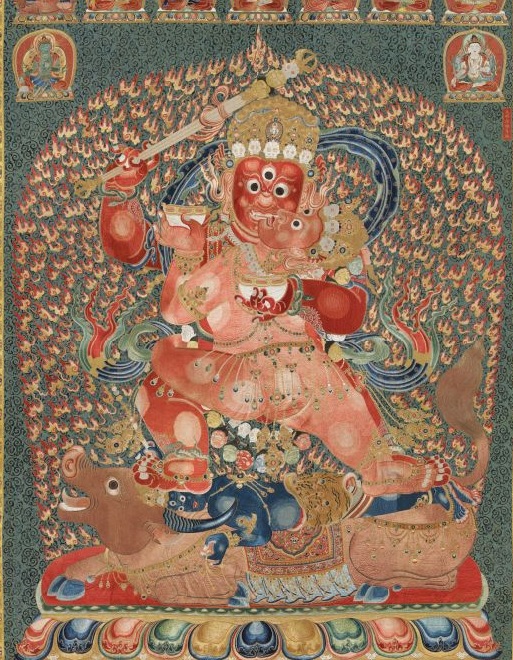 The Yongle and Xuande periods produced some of the finest and most outstanding imperial Tibetan-style Buddhist art. It is highly acclaimed both in the academic and the collecting world for its technical accomplishments, its symbolism and unique artistic style that draw influences from both China proper and Tibet, incorporating elements of Nepalese classicism. Apart from some in museums and private collections around the world, most of these beautiful works of art are still kept in monasteries in Tibet. Some of the oldest and largest temples have large collections of these precious Imperial objects from the Ming court, but their exact quantity is unknown. Even though there appears to be only a few Imperial Yongle textile thangka (presently no imperial thangka can be dated unequivocally to the Xuande period) in existence, we are equally unclear as to precisely how many have survived. In those great Tibetan monasteries that have never published their collections, such as the Potala Palace in Lhasa and the Sakya Monastery in western Tibet, we do not know how many unknown Ming imperial thangka there are. We can only be certain that the examples we know through limited publications may only be the tip of an iceberg.