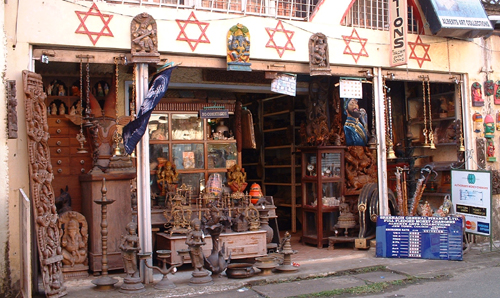 (An anonymous antique dealers tale) My interest in Chinese blue and white porcelain began in the early ’60s. While on a visit to the Sunday flea market in Nakhas, Lucknow, I picked up a blue and white plate and a vase.

They were so beautiful that a visit to Nakhas became a regular feature of my Sunday routine and I collected a wide assortment of objects ranging from a spittoon to a cricket box, incense burners and even a little sail boat.

An interest in learning more about my acquisitions followed. I read every book and magazine, visited every museum and go through every auction catalogue I could lay my hands on.

I was gratified to learn that the items I had bought were worth much more than I had paid for them. But far more gratifying was the knowledge that I had learnt so much about Chinese history and art.

I prided myself on being an authority on Chinese blue and white porcelain. Then something happened, that brought me crashing down to earth.

I had learnt enough to identify an antique from a fake. While it is comparatively easy to copy the good points of each period, it is virtually impossible to copy the defects.

So I was extremely excited to find, in an antique shop, a ginger jar with unglazed portions of the jar burnt a brick red, bubbles under the glaze and a ‘heaping and piling’ effect in the blue, indications that the jar was about 500 years old, from a period when the clay, glaze and cobalt had not reached a degree of refinement.

Considering the antiquity of the piece, I paid a reasonable price for it. It was much later that I discovered that candied ginger was such a popular import item from China during the Ming period, that there were still thousands of these jars scattered all over the world.

Because of this, my jar was worth a tenth the price I had paid for it. One of my friends fared even worse.

Portugal had a long trading history with China and it was not surprising that a great deal of Chinese porcelain had found its way to the Portuguese colony of Goa.

But now, half a century after Goa’s liberation, the Chinese porcelain pieces were few and far between.

My friend, while on a visit, saw an exquisite Kangxi bowl, outside a small sea-food joint, from which a cat was drinking milk. His heart leapt with excitement and he knew that he must have it.

He went about it as circumspectly as he could. He complimented the owner on the beautiful cat, picked it up, played with it and then asked if it was for sale.

An exorbitant price was quoted and paid. The next morning he was back at the sea-food joint. “The poor cat did not eat a thing, did not drink a drop of milk. Obviously he is used to his bowl.

Could you sell me the bowl?” “Sell you the bowl? You must be out of your mind! Because of the bowl I sell eight to 10 cats a week,” said the cat’s former owner.