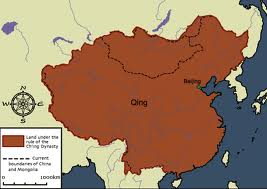 The Qing dynasty (1644—1911) was the most successful dynasty of conquest in Chinese history, and the empire over which it ruled laid the territorial foundations of the modern Chinese nation-state. The singular achievement of the Qing was to incorporate Inner Asian and East Asian subjects into a stable multi-ethnic empire. The People’s Republic of China, established in 1949, is smaller than the Qing empire at its peak by the subtraction of the independent Republic of Mongolia.

The Qing conquest of Ming China began in 1644, when a Han Chinese rebel named Li Zicheng (1606—1645) successfully occupied the Ming capital, Beijing, and the last Ming emperor committed suicide. Responding to a call for help, the Manchus led a multi-ethnic banner force south of the Great Wall and drove Li’s troops out of Beijing. What began as a campaign to ‘defend the Ming’ did not end until 1683, when all forces loyal to the Ming were subjugated and Ming claimants to the throne had been eliminated.

The extension of the Qing protectorate over Tibet dates from the 1720 invasion of Lhasa. Qing control over Tibetan affairs was initially slight and indirect. A governing council of Tibetan nobles was to administer the country, but enmity among the councillors led to civil war (1727—28); the victor of the war ruled with Qing support until his death in 1747. A small military garrison, first established in 1721 but withdrawn from 1723—28 and 1748—50, was restored with 1,500 bannermen and soldiers from the Green Standard armies stationed in the west.

Qing administration of Inner Asia, consisting of four regions – northeast Asia (the present-day provinces of Liaoning, Jilin, and Heilongjiang), Mongolia, Tibet and Turkestan (later renamed Xinjiang) – was differentiated from the administration of the provinces in China Proper, the Chinese-speaking regions within the Great Wall. Whereas the latter were administered according to a framework inherited from the preceding Ming dynasty (1368—1644), using Chinese bureaucratic principles and personnel, the Inner Asian and Central Asian regions were referred to as the ‘outer’ domains, administered by the Court of Colonial Affairs (Lifan yuan) and staffed by banner officials.