An anonymous-looking yellow bowl found stored in a biscuit tin has stunned its owner after it was valued at £50,000.

The small porcelain receptacle, that could pass for a cornflake bowl, was identified by experts as an 18th-century relic from imperial China.

It was made for use by one of Emperor Yongzheng’s ‘first rank’ concubines. 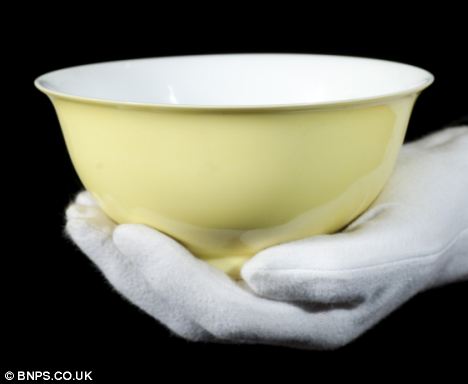 The bowl was bought many years ago by Major Leslie Marsham LVO, who once worked in the Royal household looking after the horses, at an antiques shop.

Major Marsham, who lives in a mews house near Hampton Court Palace, south-west London, had no idea of its value and kept it in the back of a cupboard.

It was only when he spotted a similar bowl sold at auction for a large sum of money last year that he wrapped it in tissue paper and placed it in his biscuit tin for safe-keeping.

The porcelain produced during at this time is generally regarded by scholars as the finest ever produced.

Bowls with a white interior and a yellow exterior were designated at the Court of the Emperor for use only by a concubine of the first rank.

To create the pure ‘imperial’ yellow, the porcelain body and clear glaze were first fired to a high temperature.

Once the piece had cooled a yellow enamel glaze of silica, lead and iron oxide was applied on top of the clear glaze and fired at a lower temperature.

It is thought to command such a high price because the newly rich Chinese are keen to buy back their own history.

He said: ‘It looks like a very anonymous piece and at first glance it may look like a breakfast bowl you would eat your cornflakes out of.

‘Major Marsham bought it many years ago at a time when he collected antiques. He bought it in an antiques shop, not realising just how important an item it was.

‘He kept it in the back of a cupboard with other pieces of China until he realised it might be valuable, at which point he moved it in to his biscuit tin to keep it safe.

‘The fact that this bowl has remained in perfect condition is largely thanks to the vendors.

‘The base bears the six character mark of the Emperor Yongzheng and the quality of the potting and the glaze is of the finest quality.

‘It is exquisite. The porcelain produced during the reign of Yongzheng is generally regarded by scholars as the finest ever produced and the bowl exemplifies the delicate potting and exquisite glazes associated with the finest imperial porcelains of the period.