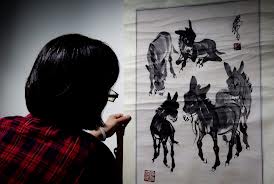 VANCOUVER – A flood of fake Chinese art has defrauded hopeful but naive investors across Canada and also threatens to mar the integrity of museums in the future, experts say.

In August, a mob of angry purchasers held a protest on the front lawn of a Vancouver man they say sold them famous artworks he claimed were original but later turned out to be fakes.

A court sided with one of the investors when she took the man to small claims court claiming she had been ripped off.

But Andrea Zeifman, of A.H. Wilkens auctions and appraisals in Toronto, said the problem is also significant in her city and isn’t limited to paintings.

Zeifman said vases, porcelain and other artifacts are being sold to unsuspecting victims by questionable sellers.

“You’ll find that pieces will come in and they’re too good to be true,” she said.

“There are so many so-called Imperial pieces that are showing up now, more so than have ever shown up in the past.”

She said it leads to questions about how much of the art is truly Imperial — pieces made during one of China’s dynasties — or just replicas people are trying to sell as originals.

“I don’t think that every palace was jam packed (with art),” she said. “And now all of a sudden it’s all coming out into the markets? It just doesn’t add up.”

The RCMP said they are not aware of any cases of counterfeit art in Canada, but said Mounties confiscated more than $67 million in fake goods in 2011.

Charlotte Wilson is an art aficionado in Beijing and also blogs on the subject. She said since the economic boom in China, people with new found wealth have lusted after artworks that were traditionally in demand, creating a massive industry of copies to fill the gap.

“Rumours speak of whole towns of industrious artists pumping these (copied artworks) out — not just famous Chinese artists, but Western ones,” said Wilson in an email.

“I’m sure these rumors speak the truth, given the Chinese proclivity for regional specialization.”

Zeifman fears that industry will hurt the integrity of Chinese art in the future.

“A lot of people are seeing how much money is involved in the business. They’ll buy a lot of fake items over in China or have them made — you can actually order them now — then send them over to Canada and pawn them off as the real deal,” said Wu.

He said a lot of modernist painters are currently being copied and sold, but a piece only becomes fake when someone knowingly tries to sell it as an original.

For now, the counterfeits are ending up in the living rooms of people like another man named Wu, who asked his full name not be used because he is ashamed.

Wu, a truck driver who is not related to the art appraiser, claims an art dealer he found online in Vancouver convinced him to spend $27,500 in June on paintings an appraiser later told him were fake and worth only hundreds.

“I phoned him, he doesn’t want to return the money,” said Wu, adding he plans on suing the man on his own after being quoted thousands of dollars in fees by a lawyer.

“Right now, I’m just thinking about how to write the court papers.”

Wu said he was roped in because the 80-year-old dealer claimed to have cancer and said he wanted to sell the paintings because his children didn’t know their value or appreciate their significance.

Earlier this summer, a spokesman for Maynards auctions and appraisals in Vancouver said about 30 per cent of Chinese artwork brought to him on any given day was fake.

He said the problem has become worse in recent years.