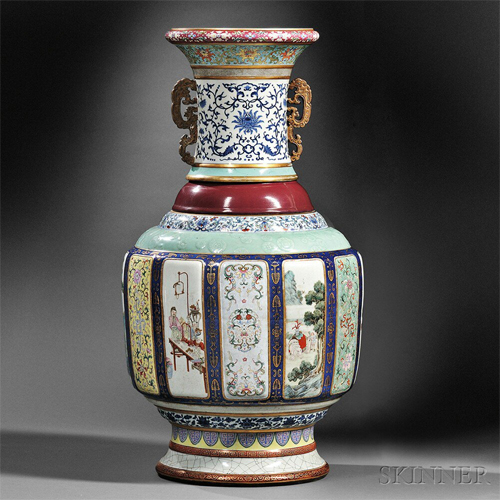 A Chinese vase from a New England collection has sold at a Boston auction house for $24.7 million, setting a U.S. record.

The elaborate 18th century vase made of painted enamel and bronze stands nearly three feet tall. It is believed to have been commissioned by the Qianlong Emperor, an important historical and political figure in China. The National Palace Museum in Beijing is home to the only other known vase of the same size and decoration.

“Imagine Louis XVI ordering up a pair of vases for Versailles, and one of them is in the Louvre and the other showed up in Boston 300 years later,” said Skinner Boston CEO Karen Keane. “It’s that important.”

While damaged with cracks and plenty of scratches, its rarity and cultural meaning drove up the price. It sold to a unidentified Chinese buyer at the Boston auction Wednesday evening.

“During the Cultural Revolution and Mao, this type of object was considered bourgeois and was illegal to have,” Keane said. “So there is a great hunger with the Chinese to repatriate their heritage.”

The price of nearly $25 million is the highest ever in the U.S. for a ceramic from the Qing Dynasty. The seller has asked to remain unnamed, but Skinner Boston says the vase came from a New England collection. This vase had sold once before in 1964 in New York City for $750.

“It’s breathtakingly beautiful,” said Judith Dowling, director of Asian works of art for Skinner Boston, adding that the vase had been fired 15 different times to achieve its color complexity. “The enamel paintings on it are exquisite to look at. When you think that they were able to technically achieve, this is what makes it so terribly exciting.”