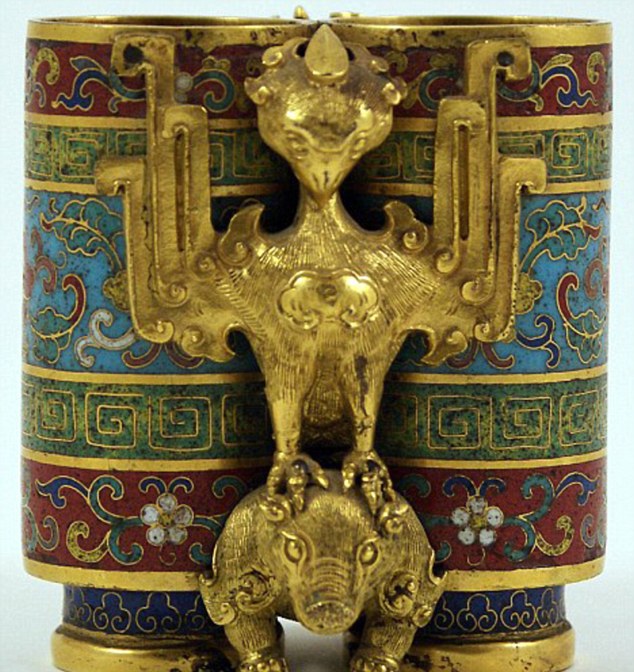 A woman who lost a two-year court battle over a family heirloom has claimed the ‘cursed’ £230,000 vase ruined her life – and that she is now being forced to sell her home.

Andrea Calland, 47, found the Chinese ornament in her garage and decided to sell it, expecting it to raise a few hundred pounds.

But the vase sold for a staggering £228,000 at auction – and Miss Calland became embroiled in a lengthy legal fight with her former mother-in-law over who should keep the money.

But since then life has become a nightmare for the freelance science tutor.

Her former mother-in-law, Evelyn Galloway, launched a successful legal bid for most of the money, claiming she had only loaned the vase to Andrea and her then husband so it was not hers to sell.

After a lengthy court case, Andrea was made to pay £180,000 to Mrs Galloway and her legal costs have now left her bankrupt and facing eviction.

She has claimed the five inch, gilt-copper vase is “cursed” after the cost of the case left her bankrupt and facing eviction from her home in Ruthin, North Wales, which she has been forced to put up for sale to clear her debts.

She said: “It was an ugly piece of china, it was five inches high and tacky. It was something you would see in a Chinese takeaway.

“It has ruined my life, I wish I had never set eyes on it really, I’ve lost everything I’ve ever owned in the world because of it.

Describing the situation as “ridiculous”, she said she has had to cancel Christmas for two years, empty her saving accounts, pawn her jewellery and sell her car and many of her possessions to pay the fees.

“I can’t believe I had got myself into such a mess, over a stupid vase,” Miss Calland said.

“I emailed the new owner, who is a revered Chinese antiquities buyer. He believes it could be cursed because despite advertising it heavily around the world he couldn’t get shift of it.”

The decorative vase, made of gilt copper, was commissioned by the Chinese emperor Qianlong, and was looted from the Summer Palace in Peking during the Second Opium War of 1860.

It was bought by Mrs Galloway’s father, James Alker, a keen art collector, at a sale in Birkenhead, Merseyside, in 1956.

He passed it on to Mrs Galloway, who in turn passed the heirloom to her son, Steven, 52, and Andrea, his then partner, in the early 1990s.

Andrea claimed the family never asked for the vase back when she and Steven split up.

However in 2011 a judge ruled the vase was not Andrea’s to sell.

Her only remaining asset is her beloved home, a pink stone cottage in the picturesque Welsh market town.

“I have no sofa, no TV, no fridge, all that is left in my house is a bed, washing machine, and a one-ring camping gas stove to cook off,” she said.

“The next stage is that they are going to force my house to auction.

“If it is not gone by the end of April they will force me back into court which is yet more fees I can’t afford.”

Speaking in 2011, Mrs Galloway, also from Ruthin, said: “The whole thing has been appalling.

“We could not stand by and let Andrea walk away with all that money.

“It is an awful lot and we had no idea the vase was worth that amount.”

Whatever its value, the vase has brought nothing but misery for Andrea.