A chipped and heavily repaired vase went under the hammer for an extraordinary £520,000 at fine art auctioneers Toovey’s Spring Gardens salerooms at Washington on Thursday 4th December 2014.

The 40.3cm-high Chinese famille rose and pea green ground vase dated from the reign of the Qianlong Emperor (1736-1795) and would originally have been one of countless decorative pieces made for the emperor’s many palaces around China. It was decorated with four floral panels representing the seasons, alternating with four further panels with poems in different calligraphic scripts.

Some of the damage to the vase 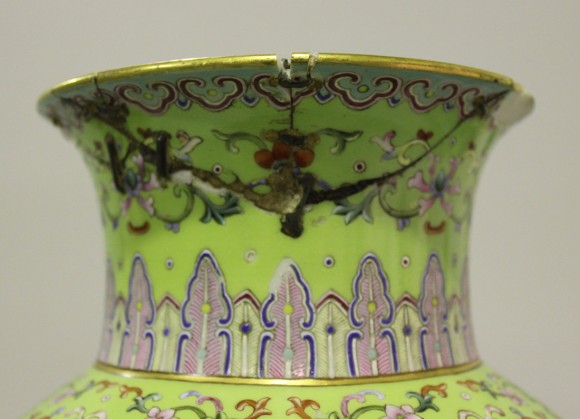 At some point in the 19th century, the rim had been broken into a number of pieces and repaired with rivets and metal wire, a popular form of restoration right up until the 1960s, when epoxy and polyester resin glues were developed. The rim also had a fair-size piece missing and there were other smaller areas of loss. None of this put off a host of Oriental antiques specialists around the world and on the day nine telephone bidders, a strong presence bidding live online and a number of key UK and Chinese players in the room all vied for the piece. After a lengthy battle, the final bidding was left to two major collectors, one bidding from China by telephone, the other, the eventual winner, bidding in the room. 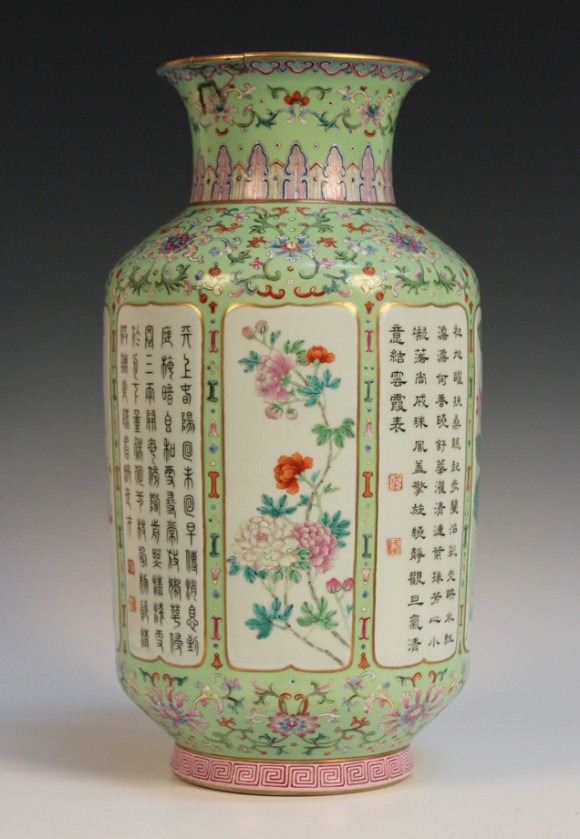 The vase was discovered by Toovey’s following a routine enquiry by email from a local couple, attaching a number of images of items at their property which they wanted to auction. They were all modest items, except for the vase, which Toovey’s Oriental specialist Tom Rowsell immediately spotted as something potentially very interesting. Tom subsequently visited the property and confirmed his thoughts that the vase was almost certainly Qianlong mark and period and a highly commercial piece in the current market. Toovey’s Oriental consultant, Lars Tharp, later concurred with Tom’s opinion. The vase had been inherited by the wife from her late father, who, she believed, bought it at auction in the 1960s.

This remarkable hammer price rounds off a record year for Toovey’s, who have been steadily notching up an impressive run of results throughout 2014.