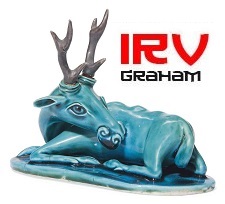 In ancient China deer were regarded as ‘immortal creatures,’ believed to have a lifespan of five thousand years. They inhabited the abodes of immortals and gods, and served as mounts for the god of longevity, Shoulao, and were companions of Magu, the goddess of immortality; often serving as her draught animal.

It was also believed that deer could sniff out the mushroom of immortality lingzhi, in much the same way that pigs could find truffles, which was the main ingredient in Magu’s Immortality wine. These associations further added to the deer’s connection to immortality.

The word for deer in Chinese, lu, is also a homophone for the word for emoluments, the salary an official receives. As such the deer also came to represent official position and wealth, and paintings and depictions of deer were given and displayed during celebrations with the wish that one will attain high position, wealth and honor.

In ancient Chinese, and some modern Chinese languages, such as Cantonese, the word for deer is also a homophone for the word ‘six.’ Combining the deer and crane, which is also associated with longevity, creates the rebus liuhe, the six harmonies. The six harmonies refer to the four cardinal points of the compass and heaven and earth, and is a concise way of referring to everything on earth under heaven. Combining the deer, crane and pine tree expresses the desire that everything under heaven and throughout the earth remain evergreen, and is a wish for longevity.

In addition, the use of deer antlers to prolong life was recorded in the Chinese medicinal classic, Shen Nong Ben Cao Jing, written over 2000 years ago, and complied into a book during the Qin and Han dynasties. Deer antlers are believed to nourish the yin forces in the body, aid kidney function, invigorate the spleen, strengthen bones and muscles and promote blood flow. Recent scientific studies have shown the velvet on deer antlers to contain a growth hormone called insulin-like growth factor 1, or IGF-1, which has shown promise in helping children with stunted growth or people with dwarfism, as well as for healing cartilage or tendon injuries. The base of the deer antlers have also been shown to possess immunomodulatory, anti-cancer, anti-fatigue, anti-osteoporosis, anti-inflammatory, analgesic, anti-bacterial, anti-viral, anti-stress, anti-oxidant, as well as a host of other beneficial properties. It is no wonder then that the deer was chosen by the ancient Chinese as a symbol of longevity.