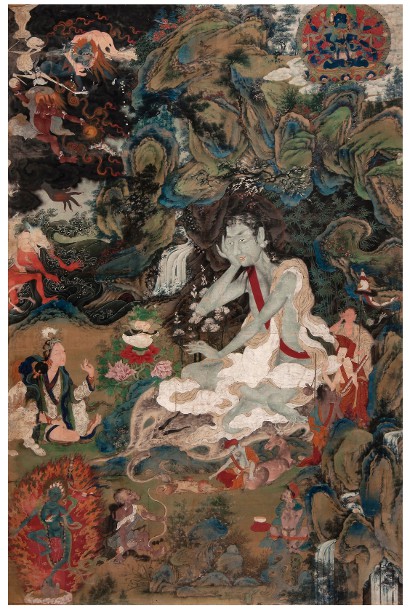 Dreweatts achieved their highest price to date in the Asian art market when an 18th century Sino-Tibetan thangka. The piece depicts Jetsun Milarepa (1052-1135), one of Tibet’s most renowned yogis and poets. According to Dr Benederra Mottino, Dreweatts & Bloomsbury’s Asian art expert, it is particularly valued for its “sublime beauty, tranquility and ecstatic clarity”.

Monumental in size at 4ft 2in by 2ft 9in (1.27m x 86cm), this thangka – consigned from a private collection in Europe – represents one of the finest products of the Karma Gardri School of Eastern Tibet where Chinese stylistic conventions were carefully woven into the language of Tibetan art.

The unusual subject, presented flanked by his students in a mountainous landscape setting of waterfalls and clouds, is the yogi Milarepa, an 11th/12th century Tibetan who rejected black magic and worldly possessions in favour of a Himalayan retreat where he achieved enlightenment. The stories of demons, mountain goddesses and mythical hunters he told through songs provide the inspiration for this thangka.

There is a strong market for Tibetan thangka, with a 13th century example selling at Christie’s in September 2012 for $1.7m – a 193% increase on estimate.

Commenting on this price after the sale executive chairman Stephan Ludwig said: “It should be noted that we are unique amongst most of our peers in dropping the buyer’s premium down to 12% at £150,000 thus making higher value lots of this nature materially cheaper for our buyers.”