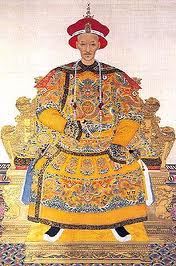 Daoguang was Emperor Jiaqing’s eldest son and became the eighth emperor of the Manchurian Qing Dynasty. He succeeded the throne in late 1820, after his father’s unexpected death from unknown causes. It was during his reign, that China was experiencing major problems with the opium trade, as well as a threat of western Imperialists encroaching on China’s borders. Opium was being imported into China by British merchants in ever increasing numbers.

During his great grandfather’s Emperor Yongzheng’s reign, only 200 chests were imported into China annually, by the time of Daoguang’s reign, the number increased to 30,000. The illegal spread of opium resulted in what became known as the First Opium War between the Qing Dynasty and the British Empire. The conflict eventually resulted in China seceding the territory of Hong Kong to become a British colony.

The Emperor also faced troubles at his own court, in 1831 he killed his own 23 year old son after striking him in an argument. Attempts to usurp the throne and oust Daoguang occurred on two separate occasions, once in 1831 and 1850, however they both failed.

Emperor Daoguang died of illness in February 1850, aged 69. His frugal and old-fashioned approach to handling the more technologically advanced Imperial invasion force, as well as mishandling the crisis of the opium trade meant that his legacy marked the beginning of the eventual decline of the Qing Dynasty.

Although Fencai porcelain manufacture carried on strong from the Jiaqing period, the overall quality degraded with only a few high quality pieces produced at the Jingdezhen Imperial kilns. The archaic zhuanshu script marks continued to be used on porcelain of this period.