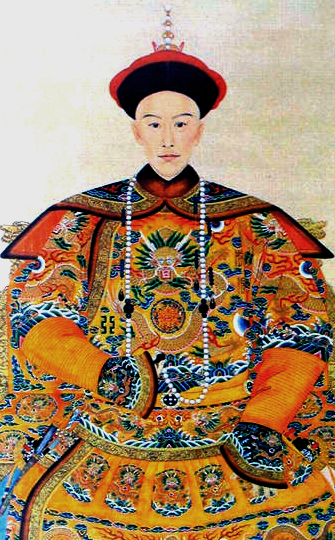 Guangxu was the eleventh emperor of the Qing Dynasty and the ninth Qing emperor to rule China.

The previous emperor did not have a successor, so the nephew of Empress Dowager Cixi – Zaitian was appointed to the throne. The empress adopted Zaitian as her son, and in 1875 she nominated him to become the new Qing Emperor to which the Imperial family agreed.

Upon his ascension to the throne, Zaitian was given the name “Guangxu” as his reign name and he became known as Emperor Guangxu. Since he was only four years old when he was appointed to the throne, Empress Cixi remained regent of the court. Even after he reached the age to carry out formal rule, Cixi still remained behind the scenes, making most of the important decisions.

Guangxu was far more progressive than his aunt and wanted to follow Japan’s stead with various reforms aimed at modernising China – including infrastructure, industry and social changes. This movement was called the “Hundred Days Reform”and was lead by Guangxu and his supporters. The plan went against the conservative, neo-Confucian values of the Empress, which prompted her to stage a military coup against her own nephew. Using a private army, she ordered the arrest of Guangxu, deeming him a “disgrace” and “unfit to be emperor”. He was put under house arrest, on an isolated island effectively ending his reign. However, she never abdicated the throne, and the era carried on with his title until 1908, although only by name.

Guangxu eventually died in November 1908, just two days before Empress Cixi’s death. Historians believe that he was poisoned under the empress’ orders (who was suffering from ill health by this point) in order to stop him from reforming the Empire after her death.

The Kangxi Era porcelain revival was still in full swing, albeit the enamels were not as intricate and beautiful as the original pieces. Marks used on porcelain of this era almost always bore kaishu script, however there were some pieces which are known to be modelled on a well-known type of mark from the Jiaqing period which is inscribed with a poem on the preparation and drinking of good tea.