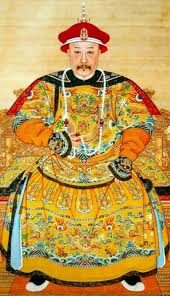 Emperor Jiaqing was the seventh emperor of the Manchu Qing Dynasty and the fifth Qing emperor to rule over China. Jiaqing was proclaimed emperor in February 1796 after his father emperor Qianlong retired. For the next three years however, Jiaqing ruled by name only, the main decisions were still carried out by his father.

During his reign, Jiaqing’s main accomplishment was to rid the Imperial court of Heshen, a corrupt government official who was involved in extortion, bribery and stealing funds from the treasury. After his arrest in February 12, 1796, Heshen was condemned to execution by slow slicing, but Jiaqing spared him from this brutal execution and he was ordered to hang himself with a silk rope instead.

After his father’s death in 1799, Jiaqing struggled with internal conflicts within his Empire. Rebellions and opposition groups made the political situation unstable and the Imperial treasury was drained to pay for opium imports into China. Additionally, members of the Qing Imperial family attempted to assassinate him on two separate occasions – in 1803 an 1813. The family members involved were executed and their accomplices were exiled.

The frequent changes in artistic style of ceramics from mid-Qing dynasty, meant that the wares were completely rejuvenated. The simplicity, elegance and robustness of the former Kangxi period no longer existed: instead, an elaborate style took hold as the representative court style in this last feudal era. Simple and natural appearance was no longer favoured in ceramics, as splendid, man-made decorations became the mainstream. This trend carried on into the Jiaqing Era and well into the Republic of China years (1912-1949). The major developments in colours and painting accomplished in the early period were used throughout the rest of the Qing dynasty period.