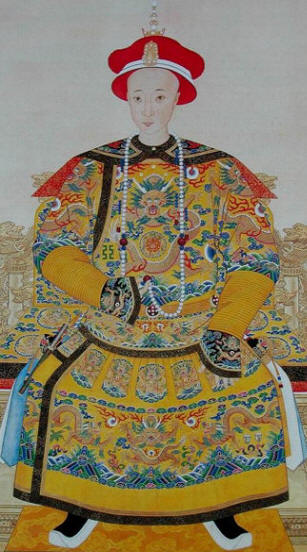 The only surviving son of Emperor Xianfeng and Empress Dowager Cixi, Tongzhi was only 6 years old when he was appointed as the heir to the throne. Since he was too young to take reign of the Empire, his mother Empress Cixi became the unofficial ruler of the court. In fact, the Empress was the one to make all the important decisions and even attempted to restore the Dynasty’s former glory, throughout Tongzhi’s short 12 year reign. Tongzhi died in 1874 at the age of 18, with no heirs to his name. The official reason for his death was claimed to be smallpox but it was widely rumoured that he actually died of syphilis due to his alleged affairs with prostitutes outside the court.

Tongzhi had little influence on political or official affairs of the court, Cixi was the one who orchestrated the “Tongzhi Restoration” which was the name of the plans to reform and modernize the ailing nation. The disastrous events of the preceding Xianfeng Empire was the wake up call needed to rethink the foreign relations with the West, as well as the quelling any domestic disputes and rebellions. She managed to consolidate divided members of the Imperial court through shrewd strategy, bribery and brutal execution of the main opposing members, securing herself as one of the prime rulers “behind the curtain” since women were not allowed to officially rule the Manchu Qing Empire. Her hard line approach to any opposition also meant that she managed to quell the Taiping Rebellions though military intervention, using her rich and powerful connections to finance the army force to do so.

The Empress initially accepted the idea of reforming the archaic Imperial policies towards foreign influence and religion. However, her traditional values and old-fashioned mindset took over. Plans to modernise the rail roads and the military equipment were hindered by her reluctance to abandon the agricultural economy which the Empire was built upon, in favour of industrialisation, which was occurring in parts of Europe.

While Cixi’s reforms did bring some changes to China, her reign was just a stepping stone in the inevitable downfall of the Qing Dynasty. The Empress died in 1908 and consequently, the Qing Dynasty collapsed as a result of the Revolution of 1911.

The porcelain produced during the Tongzhi/Cixi Era can be considered as the revival of the Kangxi period. Famille verte style enamels, blue and white porcelains and even replicas of monochrome wares such as Sand-de-Boef (Ox-blood) were produced. The wares produced in the period were not attempting to make perfect copies of the styles, but rather tried to carry on the production in the same Kangxi spirit and tradition, as if the intermediate periods never happened. The problem with that however, was the fact that many of the techniques and methods from the period were never recorded and died with the artisans that came up with them. Additionally, the sources for the raw materials also changed. Although the white and blue pieces were pretty good, these factors meant that these revival period pieces never matched up with the quality of the authentic Kangxi pieces. This was especially true of the monochrome pieces which ended up glazes that were too thick. The revival can be partly attributed to the great interest in Chinese porcelain from the west, particularly the United States.

The Tongzhi period saw the phasing out of the archaic seal script use on Imperial porcelain. The kaishu script was becoming the standard of use for porcelain marks.