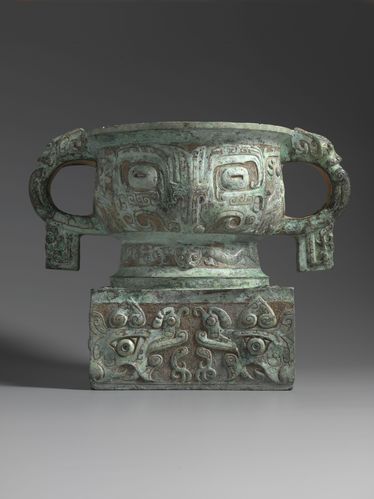 An ancient Chinese bronze with a record $12 million (7.4 million pound) asking price has been sold for an undisclosed sum by the London-based art dealer Eskenazi Ltd.

The sale of the 3,000-year-old ritual food vessel to a North American collector was confirmed this week and disclosed today in an e-mail by Sue Bond of Sue Bond Public Relations, publicist for the Mayfair district dealer. The bronze attracted an early reserve when Eskenazi showed it during the annual Asian Art in London event that opened on Oct. 31 and continued this month. Bond declined to disclose the buyer’s identity.

The two-handled gui, from a private collection, had been included in the 2012 Royal Academy of Arts exhibition “Bronze” in London. After several years of a bull market for museum-quality historic Chinese artworks, premier objects have become increasingly rare, pushing up prices for the few trophies that occasionally appear for sale, said John Berwald, a London-based dealer at Berwald Oriental Art.

“This was a strong price for a top object,” Berwald said. “Exceptional pieces now have an extra prestige, and when one comes along, it has to be dealt with.”

As buyers have become more educated, they know they can “leave the mediocre items as hundreds more of them will be available at the next series of sales,” he said.

Eskenazi’s Western Zhou-period bronze was distinguished by the quality of its casting, and by being one of a group of about six surviving examples signed by Bo Ju, Berwald said. Others bearing the same name are at the Capital Museum in Beijing and the Morgan Library & Museum in New York, according to Eskenazi’s catalog. Bo Ju was a senior official in Yan, the region comprising modern Beijing, and was closely associated with the state’s ruler.

Eskenazi said the asking price was a record for the published sale of a bronze object produced from 3000 B.C. to 221 B.C., considered the “Archaic” period in the trade for historic Chinese artifacts. Sotheby’s (BID) in New York sold a similar vessel from the same era, from the Albright-Knox Art Gallery in Buffalo, New York, for $8.1 million in March 2007. Last month, the mainland-based property developer Zheng Huaxing paid a record $30.5 million for a later, Ming Dynasty gilt-bronze seated Buddha at Sotheby’s in Hong Kong.

Asian Art in London, in its 16th year, included more than 50 selling exhibitions at commercial galleries.