Estimated 30,000 pieces of Ming porcelain to be salvaged from sunken ship 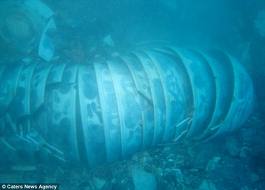 The salvage operation, which started in June, was suspended due to the effects of typhoon Kai-Tak, which made landfall in the coastal area of Guangdong at noon on Friday.

Guangdong was a major center for sea trade in ancient China.

The current round of underwater archaeological work will finish by the end of September, said Cui Yong, head of the team of archaeologists.

The ship sank in the Sandianjin waters off Nan’ao county, Shantou, during the mid- to late-Ming Dynasty (1368-1644).

The ship is believed to have been bound for the Philippines and Malaysia, said Cui.

Archaeologists had previously recovered over 20,000 antiques, including porcelain and copper coins, and identified 25 cabins.

Local fishermen found the wrecked ship, estimated at 25 meters in length and seven meters in width, in May 2007. It was buried in silt 27 meters underwater and about 5.6 nautical miles from Shantou.

Experts said the antiques salvaged from the Nan’ao-1 provide evidence that the “Maritime Silk Road” once existed in the South China Sea.