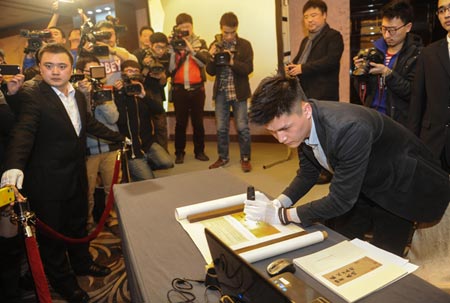 A specialist in antiques at Beijing’s Palace Museum has been ordered to pay a fine and apologize to an auctioneer whom she accused of selling a fake Tang Dynasty manuscript.

The piece, known as Gong Fu Tie, was bought by a Chinese collector in autumn 2013 and its high price of over 50 million yuan (US$8 million) triggered widespread discussion as to whether it was the original work of the 8th century poet Du Fu, in which he spoke of his feelings upon leaving a good friend.

By January 2014, an internet user on Weibo began to attack the seller of the manuscript, a general manager at an auction house known as Ji Tao. The Weibo account holder was later identified as Yang Danxia, a researcher at the Palace Museum in Bejing.

A court in Beijing ruled Yang guilty of defamation against Ji, and ordered him to pay a 3,065 yuan (US$495) fine as well as issue a public apology to Ji for 30 consecutive days on his own Weibo account. In addition, the court also told Yang to delete all defamatory posts concerning Ji.

Ji filed the suit against Yang in April 2014.

Yang is said to have over 20 years of expertise in authenticating manuscripts. Yang said she attacked Ji because he had used the sale of the manuscript to discredit the Palace Museum.