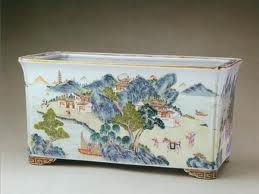 The Qing Dynasty (1644–1912) was a golden period for Chinese ceramics. Famille verte, brightly colored and translucent with a color scheme based on different shades of green combined with tones of red, blue and yellow, was introduced at the start of the 18th century. It declined in popularity after the Kangxi period (1662–1722), when famille rose, with a more opaque palette of pink and rose hues, became the dominant production. Today, both are in demand among collectors. Famille rose enamels were introduced during the reign of the Emperor Kangxi, who in 1683 restored Jingdezhen, the center of Chinese porcelain production that had been destroyed during the Qing defeat of the Ming Dynasty earlier in the century. In the Yongzheng period (1723–35) famille rose developed with the addition of a pink, derived from colloidal gold (particles of gold suspended in a fluid), which was used in a wide spectrum of tones. An opaque white lead-arsenic pigment was mixed with the colors to modify them, enabling the painter to achieve a subtle range of graduated color values.

“The Chinese could make porcelain before we could in the West,” says Clemens Vanderven, owner of Vanderven & Vanderven in The Netherlands, “but Westerners made enamel as far back as Roman times.” Many attribute the Chinese use of the famille rose palette to the Jesuit missionaries who came to the court in the early 18th century. That the pink enamels were called “foreign colors” supports that notion. Once established, famille rose became dominant, and the finest pieces are those of the Yongzheng period made in imperial kilns at Jingdezhen for the exclusive use of the emperor and his court.

There are two distinct markets for famille rose and famille verte porcelain. Although they it made chiefly for export, a smaller portion was made for the Chinese court, and these are bought primarily by Chinese collectors. The export ware has traditionally been favored by Westerners, who were affected by the recession more than their counterparts in Asia. “The export market is just coming back,” says dealer Michael Cohen, co-owner of Cohen & Cohen, which is based in Surrey, England. “The top of the market remains strong and the lower market has been in the doldrums, but it is picking up.” Cohen was the underbidder on a pair of 18th-century Chinese export famille rose pheasants that fetched £200,600 ($328,000) from a European collector at Plymouth Auction Rooms in England on Nov. 4, soaring far beyond their modest estimate of £800–1,000. Despite being damaged—one beak had been rebuilt and one tail was broken—the birds attracted bidders from Belgium, France, Portugal and England.

The prices for export wares is stable, says Vanderven, adding that there have been changes in fashion. “Series of 12 or 24 plates are out of fashion,” he says. “The taste today is more for objects such as vases.” What is in demand now, according to Christina Prescott-Walker, head of the Chinese works of art department at Sotheby’s New York, are figural pieces and armorial wares, as well as rare American pieces with good historic provenance. The auction house’s upcoming sale of the collection of the late great Chinese export porcelain dealer Elinor Gordon on Jan. 23 has famille rose pieces with estimates ranging from $800 to $20,000. “Most of the pieces were made for the European market,” Prescott-Walker says.

The biggest change in the market in recent years is that Asian collectors, who used to shun export ware, are buying it in increasing numbers. “Good famille rose is attracting Chinese buyers,” says Cohen, “even if it was made for export, just as long as it is in the Chinese taste.” For example, he explains that the Chinese like designs without borders, which Europeans prefer. They also like figural pieces. “Famille rose and famille verte pieces in Chinese taste are screaming ahead,” says Conor Mahoney, co-owner of The Chinese Porcelain Company in New York. “Any piece that follows a European silver shape is definitely not for the Asian market.”

“We sell export porcelain to buyers from China, Singapore and Vietnam,” says dealer Jorge Welsh, who has galleries in London and Lisbon. “Every year we see an increase in Asians buying. I have sold armorials and porcelain with religious subjects to China. The growth has started gradually, and I predict it will be very strong in the next five to 10 years.”

Famille verte and early famille rose pieces cross between Western and Chinese buyers, says Becky MacGuire, senior specialist for Chinese export art at Christie’s New York. “The dividing line between Kangxi export ware and earlier 17th-century pieces made for the Chinese market is not as strong as it became later,” she says. All of the great English country house pieces—garnitures, large chargers, jardinières—were brought back to Europe but were not necessarily made for export.” MacGuire says she finds that the Chinese “are drawn to pristine and very good quality enameling in the early periods. They are not interested in silly, charming or amusing export ware with historical associations.”

Emperor Yongzheng, fourth son of Kangxi, “was extremely refined,” says Vanderven. “At the top end of famille rose, it is hard to tell whether it was court taste or the height of European taste. Since we are discovering more pieces in storage rooms in Taipei from the Imperial collections, we are now discovering that they had pieces that we always thought were exclusively export.”

The famille rose and famille verte pieces that were made for the court and not for export are fetching the highest prices today. Imperial pieces sold very well at Christie’s sale in New York on Sept. 15: A pair of late-Qing famille rose vases with seal marks of the Emperor Daoguang and of the period soared over its $60,000–80,000 estimate to sell to Joseph Chan Fine Art of Hong Kong for $902,500, and an unusually large famille verte charger, Kangxi mark and period, sold to Littleton & Hennessey Asian Art of London for $722,000 (est. $200,000–300,000). In the same sale a Yongzheng Imperial famille rose “Mille Fleurs” bowl sold for $314,500 to an Asian buyer, against an estimate of $12,000–18,000. Asked about the discrepancy between the estimate and the price, Tina Zonars, Christie’s international director of Chinese works of art, said that the piece was “completely broken in half but very rare. As a perfect piece it would have fetched $1 million.” On Oct. 9 at Sotheby’s Hong Kong, a rare famille rose celadon-ground butterfly vase, Qianlong mark and period (1736–95), brought $HK21.4 million ($2.8 million), over an estimate of $HK12–15 million.

“For the last 10 years,” says Cohen, “the market for Qing imperial porcelain has been the hottest thing for Chinese buyers. Important famille rose makes huge prices.” For example, an Imperial famille rose vase that was consigned by Gordon Getty was sold at Sotheby’s New York on Sept. 16 for $902,500 (est. $250,000–350,000). The vase was made at the Imperial kilns at Jingdezhen. “It has always been the case that Imperial pieces brought higher prices,” says Prescott-Walker, “but now the market is driven by the Chinese, although it is still international.”

“Famille rose has gone extremely high,” says New York dealer Mustafa Hassan, owner of Imperial Oriental Art. “When the mainland Chinese came to the market, they paid top dollar for 18th-century famille rose, and it won’t stop. They especially like vases, even if they are damaged, just as long as they have an Imperial mark, because not many exist with a reign mark. Prices start from close to $250,000 and go up to $19.5 million; the record price paid was for a 6-inch famille rose bowl at Christie’s Hong Kong.” The bowl came from the collection of Robert Chang, a Chinese art collector and dealer, and sold in Hong Kong in November 2004 for $HK151.3 million ($19.6 million). Known as the “swallows bowl” for its depiction of a pair of those birds, the Qianlong mark-and-period bowl once belonged to Woolworth heiress Barbara Hutton and is similar to one in the famous collection of the Perceval David Foundation in London. The buyer was Dr. Alice Cheng, Robert Chang’s sister.

The market for famille rose is poised to rise even higher. “The competition is great right now,” says Hassan. “Americans and Europeans cannot compete with the Chinese for famille rose, although they might have a chance when it comes to famille verte. Many more Chinese buyers will come on the market. They do not buy only as a collecting hobby but also as an investment. They will buy a piece for $1 million, hold it for two or three years, and put it on the market for double the price, and most of the time they will get it. As one of the Hong Kong dealers recently said, ‘This is only the tip of the iceberg.’”