Famille-Rose porcelain gets its name from the pinkish hue that characterises the pieces. This colouring is created by adding colloidal gold, tiny fragments of gold suspended in water, to the glaze. The technique was introduced to China from Europe during the reign of the Qing Dynasty Emperor Yongzheng, who ruled from 1723 to 1735.

Some authorities give Jesuit priests the credit for bringing the process to China, and the Chinese themselves called Famille-rose ‘fencai’, meaning foreign colour.

Production of Famille-rose pieces continued throughout the Qing Dynasty until its end in 1911, with the finest pieces appearing during the rule of Emperor Yongzheng. The best famille-rose pieces are highly coloured with a crystal appearance and a very hard glaze with a notably translucent quality. 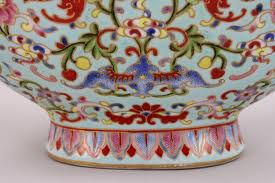 Famille-rose porcelain was made at the famous Imperial kilns of Jingdezhen. The pieces were first fired and then painted and given a final glaze of quartz sand mixed with lead and sometimes fern ash before a second firing. The special glaze was used to enhance the brightness of the colours.

Pieces were made both for the domestic and export markets, with the very finest pieces commissioned by the Imperial court. It’s worth noting that the pieces that reached Europe were much copied by artisans there. Experts can quickly identify copies by a range of telltale signs such as the quality of painting, the thickness of the enamel and the shape of the pieces. The character marks painted on the base of pieces are also a useful indicator of authenticity.

Famille-rose ceramic forms include vases, boxes and urns, as well as dinner sets bearing coats of arms that were commissioned by wealthy European families. Commonly seen motifs include birds, flowers, dragons and phoenixes and the pieces often have narrative themes from Chinese literature and mythology. Other pieces are clearly influenced by European paintings of the era.