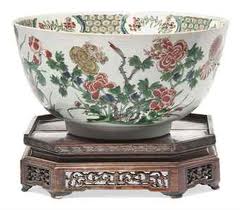 Kangxi was the third emperor of the Qing dynasty and ruled from 1662 to 1722. The best of Famille-Verte porcelain was produced between about 1685 and 1725, with most of it manufactured at the Jingdezhen Imperial factories. These had been reopened at Kangxi’s order after closure during fighting occasioned by the ‘Rebellion of the Three Feudatories’ from 1774-76. Some Famille-Verte pieces were also produced in Canton.

Famille-Verte porcelain was made for both the export and domestic markets, with many of the export pieces exhibiting the six-character Kangxi mark painted on the base. Collectors value the high quality of this ceramic ware which is characterised by highly detailed decoration and glazes with outstanding qualities of iridescence and translucence. 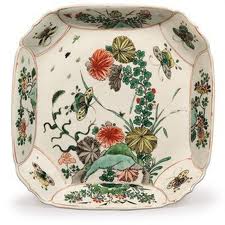 Famille-Verte pieces are recognisable by their vivid green enamels and their polychromatic overglazes which include red, yellow, blue and black, and less commonly gold. The pieces are made with a highly refined paste that results in an exceptionally fine porcelain.

Common Famille-Verte forms include jars, vases and figurines. The decoration often portrays mythical animals, flowers and butterflies, as well as scenes from Chinese life and mythology. Figurines take the shape of human figures as well as animals such as lions and tigers.

Collectors need to exercise caution about the authenticity of these pieces. One authority estimates that for every genuine Famille-Verte piece from the Kangxi era, there are 50 copies made in Europe in the 19th century. Experts can readily identify copies by the quality of the glaze, the colours of the enamelling and the crudeness of the foot rims.