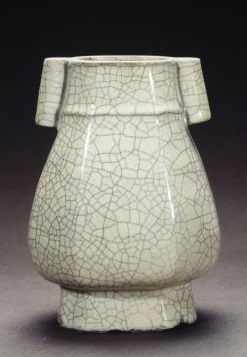 Ge ware, along with Guan, Ru, Ding and Jun, comprise the ‘ Five Great Wares of the Song Dynasty’. The problems of distinguishing the two crackled wares, Guan, and Ge, were discussed at length during a three-day conference held at the Shanghai Museum in 1992, and while no unanimity of opinion was reached, it was generally thought that those wares with a jinsi tiexian (‘gold thread and iron wire’) crackle should be designated Ge.

Recent archaeological researches suggest that Ge wares may have been made at kilns just outside the walls of the Southern Song palace at Hangzhou, while other suggest that they may have been made at kilns nearer to the centre of Longquan production. What all agree, is that Ge wares display the qualities that might be expected of vessels intended for imperial appreciation.

The name has been used for centuries, and the ceramic ware associated with it has traditionally been greatly admired by connoisseurs. Literature relates Ge ware to Guan, or official, ware but the place of its manufacture remains as much a subject of debate as its precise dating.

Ge ware is first mentioned in the Zhizheng zhiji by Kong Qi in 1363, where it is referred to as gegedong and gege ware. The author records the purchase of a ding-form tripod incense burner “refined, and though new, its appearance is rich and lustrous as though made in the past”. The name Ge first appears in the Ming Dynasty in the Xuande dingyipu.

The most generally accepted description of Ge wares is that they have a pale, often greyish or yellowish glaze with a double crackle. The larger network of dark crackle lines are on the surface of the glaze, while a finer network of golden brown crackle appears deeper in the glaze. This feature is known in Chinese as jinsi tiexian (‘gold thread and iron wire’).