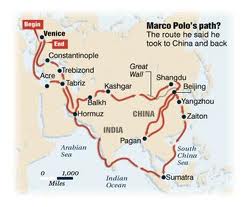 Professor of Chinese Studies at the University of Tuübingen Hans Ulrich Vogel claimed that the ancient Italian world traveler Marco polo did really go to China.

Italian archaeologists had earlier said that Venice’s most famous traveler might had never been to Asia and compiled the orient stories in his book from other traders’ experience.

They believed the orient descriptions featured in Marco Polo’s travelogue The Travels of Marco Polo is not from his own journeys through Persia, Asia and the Far East between 1271 and 1291.

In his search, Vogel began with a comprehensive review of the arguments for and against, and followed it up with evidence from relevant Chinese, Japanese, Italian, French, German and Spanish literature.

The researcher concluded that no other Western, Arab, or Persian observer reported in such accurate and unique detail about the currency situation in Mongol China.

He also stressed that Polo is the only one to describe precisely how paper money was made from the bark of the mulberry tree. He not only details the shape and size of the paper, but also describes the use of seals and the various denominations of paper money.

Marco Polo is also the only one among his contemporaries to explain that paper money was not in circulation in all parts of China and was only used in the north and the regions along the Yangtze.

As confirmed by Chinese sources and archaeological evidence, cowries, salt, gold and silver were the main currencies in other parts of china such as Fujian and Yunnan.

The results despite a few, well-known problems with Marco Polo’s writings, provides ample evidence that Marco Polo did go to China, Vogel emphasized.