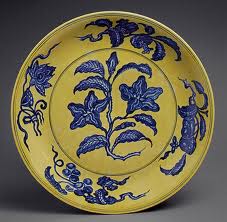 Hongzhi was the son of Chenghua Emperor and became the ninth emperor to rule the Ming Dynasty. His rule of the empire was known as the “Hongzhi Silver Age”, he was a wise and peace-loving ruler and the only known monogamous emperor in the history of China.

Porcelain made during the Hongzhi era, while maintaining the colourful styles developed in the latter part of the 15th century became increasingly stylised and weaker towards the end of the reign.

Perhaps the most notable of the colour wares were the advancements with the yellow porcelains at the Imperial factory. The bright lemon yellows almost reached the quality of the Kangxi and Qianlong pieces of the Qing Dynasty period. For instance, the rice bowls featured delicately constructed walls and precisely incised designs in greenish-blue enamels. The glaze was also finer and shinier than the earlier periods.

Within the last years of the Chenghua rule, the Jingdezhen kilns which worked for the court were closed down. Private workshops filled imperial orders until the craft polices were changed by Hongzhi in 1505.

The Hongzhi era blue-and-white porcelains perpetuated the aesthetic virtues of the Chenghua wares. Dishes and bowls repeat the classical themes of the dragon or flower scrolls. In terms of decoration design, there was a small change in composition between the Chenghua and Hongzhi periods. Many bowls and plates feature more densely and fully decorated inner walls. This is rather unique to the era because the pieces before and after this period were plainer and more sparsely decorated. Some unmarked bowls decorated with playing children are also attributed to this reign. The drawing is lively but the thick glaze blurs the contours and creates a foggy effect. The blue is often greyish and varies with the firing.

The exquisite calligraphy of the nianhao is precise and well centred, a hallmark of the true Honzhi Imperial mark. The six characters of the mark are written under the base within a double circle and are of two types: in one, the characters are small and unevenly spaced; in the other they are larger and regular.