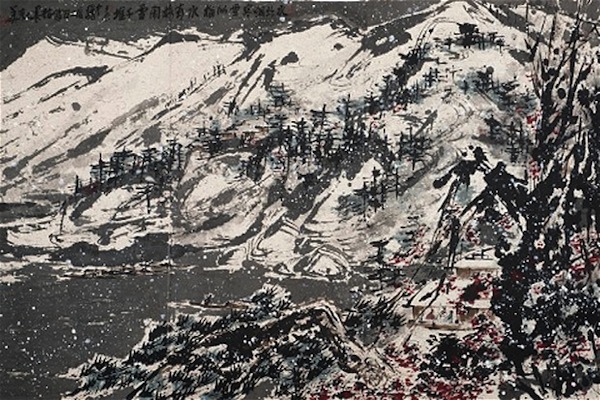 To art circles, Hong Kong artist Cui Ruzhou’s ink-washed “Snowy Mountain” is worth US $3.7 Million (22.9 Million Yuan) when it was recently auctioned off.

To the cleaners at the Grand Hyatt Hotel in Hong Kong, it was just one of many items to be hauled off as they went through their daily chores.

And so the pricey work of art disappeared.

In a frantic search, Hong Kong police tried the hotel’s closed circuit cameras and discovered that the canvass was stored in an ordinary box and mistakenly thrown away.

The authorities are tracking the whereabouts of the painting and believe that it might have been dumped at Tuen Mun landfill, northwest of Hong Kong.

As of the moment, authorities consider the painting a “lost item” but are not discounting possibilities that the artwork was actually stolen and made to look like an accidental loss.

Hotel management maintains that it was not responsible for the loss of the painting and lays the blame on Poly Auction, the exhibitors who directly installed and dismantled their auctioned items.

The Grand Hyatt instead extended all forms of assistance it can provide in the search and recovery efforts for the missing painting.

Twenty eight other works of Cui Ruzhou were sold during the same auction, including the painting “Landscape in the Snow,” sold to a bidder at US $23 Million (142.6 Million Yuan).

Cui gained global prominence for his unique style of sketches and finger paintings in the traditional Chinese way, developed since the Tang Dynasty (618-907 AD).

Cui never departs from the traditional Chinese style of painting, and focuses his work on flows of rivers amidst the jagged edges of snowcapped mountains.

His works traditionally depict rural China and its varying landscapes.

Hong Kong authorities will not relent in the effort to find the missing “Snowy Mountain” and vow to comb through the garbage.

An in-depth investigation is also on-going to determine if the situation was accidental or part of an elaborate scheme to steal the artwork.

For now, many intense followers of art are eagerly awaiting the recovery of the Cui masterpiece.

The lost “Snowy Mountain”, which sold for US $3.7 Million, makes it the most expensive garbage in Hong Kong.