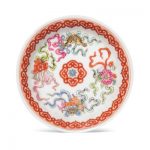 Unless you have been around Chinese antique porcelain for a number of years then simply identifying a piece as Chinese & not Japanese can be confusing. 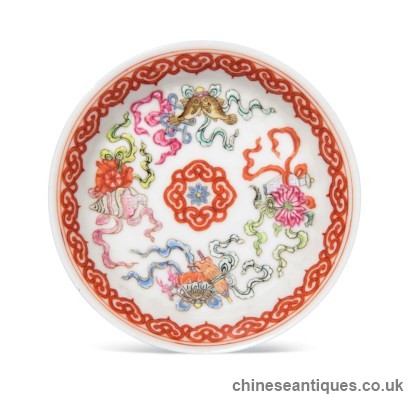 The ‘Eight Auspicious Symbols’ (bajixiang 八吉祥), introduced to China with Tibetan Buddhism during the Yuan dynasty (AD1279-1368), are the wheel of the dharma, conch shell, victory banner, parasol, lotus flower, treasure vase, fish pair and the endless knot. They have been used in decorative arts to bring peace and blessings and stand for the following virtues:

Wheel of the Dharma (lun轮)
Knowledge 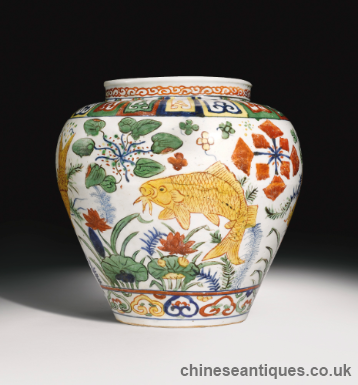 The fish symbolises wealth, as yu for ‘fish’ sounds like the yu 馀 for ‘abundance and affluence’. It is also a sign of rank and a permit to enter the court precinct; consequently, officials of the fifth rank and above wore fish ornaments during the Tang dynasty (AD 618-906). Due to its reproductive success, the fish also signifies marriage and the birth of many children. 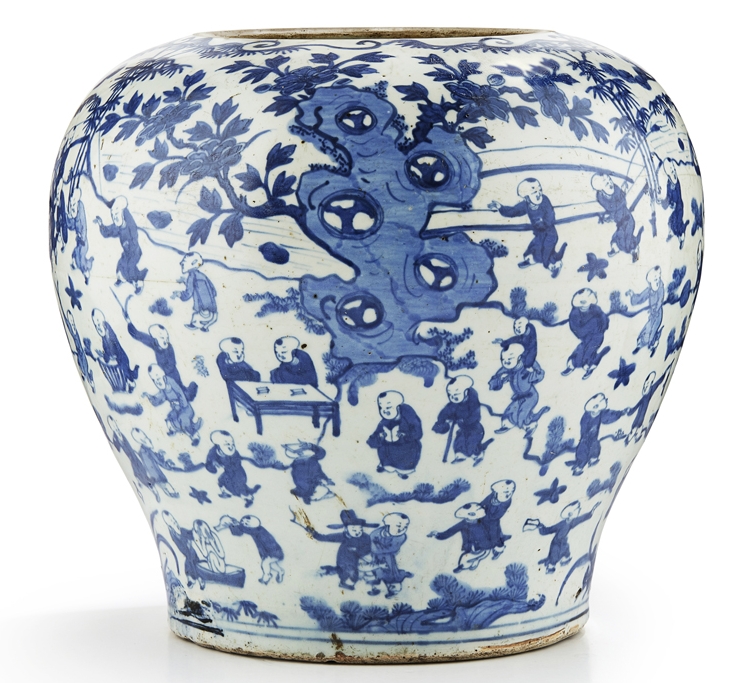 In Chinese art, the depiction of young boys at play is considered a sign of good fortune, representing the blessing of having many sons to carry on the family name. The combination of five boys derives from the saying wu zi deng ke, referring to the supreme achievement of five sons from the same family passing the civil service examination. 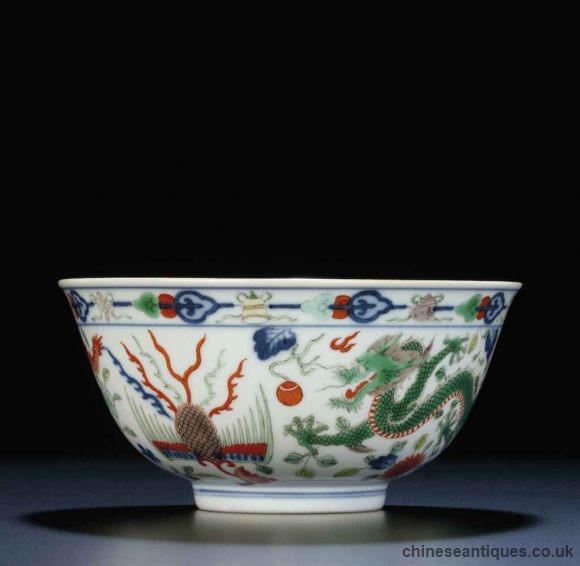 The dragon and the phoenix represent the height of power and auspiciousness. Emblematic of male prowess, strength and divine rule, the dragon symbolises the Emperor of China and is ranked first among mythical beasts — believed to bring fertility to the land.

The dragon is one of the most frequent motifs in Chinese porcelains. ‘It is a symbol of the emperor and one of the most sought after decorations for today’s Chinese collectors.

The phoenix, on the other hand, represents female authority, benevolence and beauty, and is associated with the Empress of China. The phoenix appears during times of peace and prosperity; it is believed that when Confucius was born, the phoenix announced the emergence of the great man. The combination of dragon and phoenix is often seen at weddings, conveying blessings and good fortune. 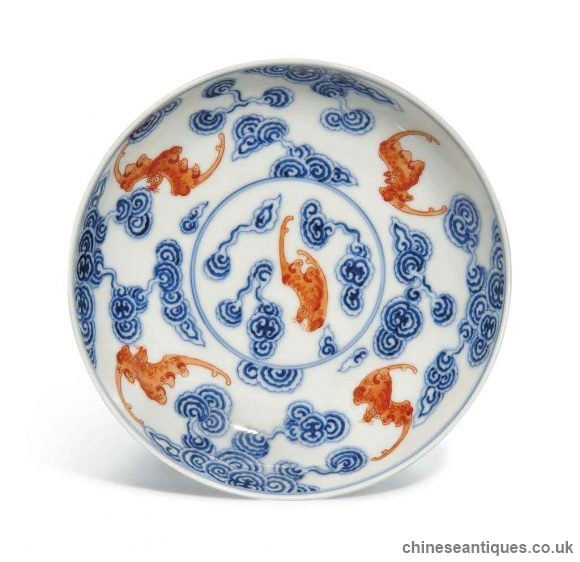 The bat is a symbol of happiness and joy. The Chinese for bat (fu 蝠) sounds identical to the word for good fortune(fu 福) making bats a popular Chinese rebus. Five bats together represent the ‘Five Blessings’ (wufu 五福): long life, wealth, health, love of virtue and a peaceful death.

With a life expectancy of more than 20 years, cranes symbolise longevity. The Chinese word for crane, he, sounds similar to the word for ‘harmony’. A pair of cranes can therefore signify a harmonious marriage: specifically, a happy and long-lasting union. 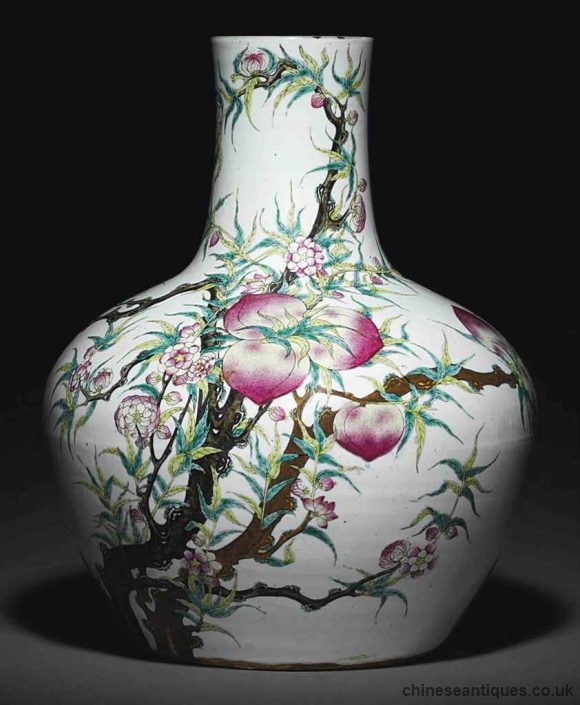 A symbol of longevity along with the venerable God of Longevity, Shoulao 寿老, the peach is one of the most popular motifs found in art. The peach is a symbol of immortality, said to have grown in the orchard of the Queen Mother of the West (Xiwangmu 西王母). 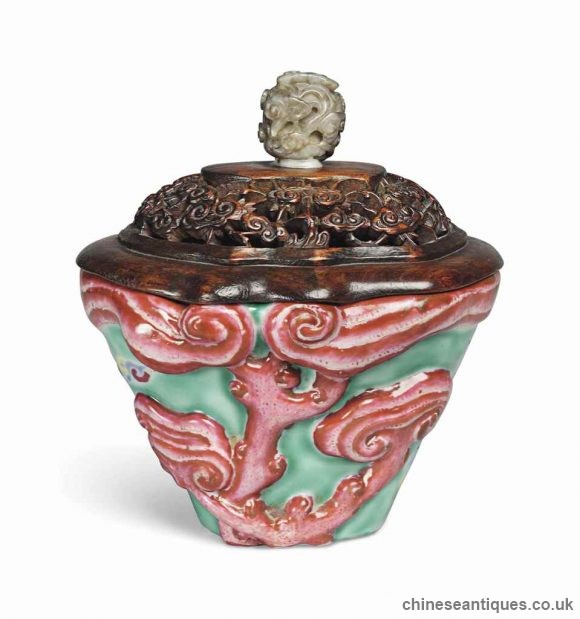 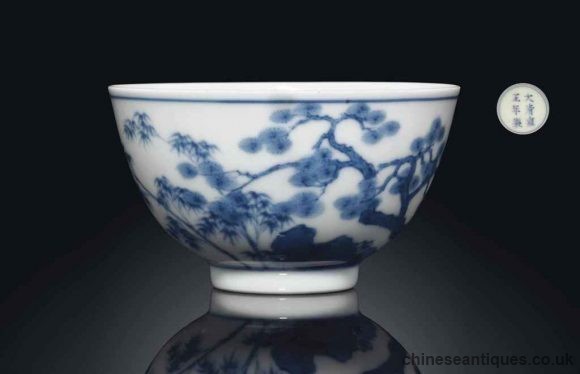 When shown together the pine, bamboo and plum are known as ‘The Three Friends of Winter’ (suihan sanyou 歲寒三友). The ‘Three Friends’ flourish even under adverse conditions and are symbols of longevity and perseverance, which are virtues attributed to the scholar-gentleman. 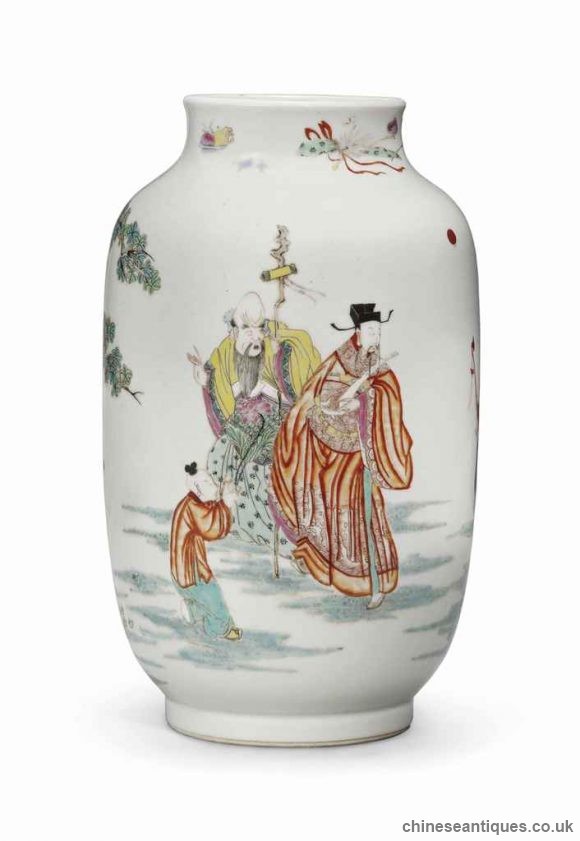 The Three-Star Gods are the Gods of fortune, prosperity and longevity, each recognisable by their characteristic iconography. The God of Fortune is depicted as a man carrying a young boy, as the highest blessing is having a male child to carry on the family name. The God of Prosperity holds a sceptre of power, symbolising the ability to reap high rewards. The God of Longevity carries a tall staff and a peach which represents immortality and is sometimes accompanied by a crane or deer and are often represented together.

If you have a piece of Chinese or Oriental porcelain and your not sure of its age or value then you should really consider using our Chinese Antique Valuation Service as the last thing you want to do is risk under selling the piece due to lack of knowledge or ill gotten advice.