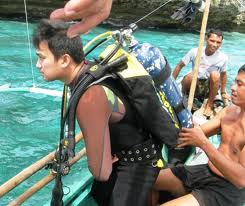 Tieu Viet Thanh, police chief of the district’s Binh Chau Commune, said concerned agencies have seized the 12 ancient bowls made of porcelain and 4 large enamel bowls – two in grey and the others in sapphire blue – which divers had picked up in these undersea raids.

The shipwreck was discovered on September 8 in a sea area off the commune’s Chau Thuan hamlet by some fishermen who were fishing in the area.

Immediately after, locals flocked to the area to search for antique items from the sunken ship. They have taken away a great deal of ancient items, despite concerned agencies’ efforts to prevent locals from doing so.

Many of them have used machines to blow away sand covering the sunken ship and expose antique items. Due to their search, many items have been broken, authorities said.

“We are calling on people who have found and seized ancient items to hand them over to local authorities and not keep them illegally,” said Nguyen Quoc Vuong, chairman of the commune People’s Committee.

However, despite prevention efforts from police and border guards, many people continue to sail to the area, even as early as 2 or 3 a.m., to hunt for ancient items, Vuong said.

Le Thi Chung, deputy director of Quang Ngai Province’s Museum, said the antiques date back to the 15th century and are from the Ming dynasty in China.