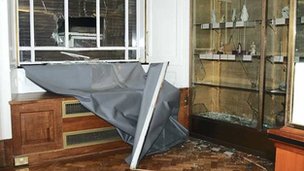 The mystery of who stole 18 “valuable and culturally significant” pieces of Chinese art from a Cambridgeshire museum has been solved – but detectives appear no nearer to finding the rare artefacts.

Police said new lines of inquiry were being followed but admitted it was “scaling back” the operation following the conviction of four people for the theft.

The art was taken from the University of Cambridge’s Fitzwilliam Museum at about 19:30 BST on 13 April in a raid carried out inside a few minutes. Various experts were consulted by police as part of the inquiry, including officers from the Metropolitan Police’s Art and Antiques Unit and specialist art dealers.

Theories investigated include claims the haul could be gathering dust in a lock-up or being used as templates in the lucrative Chinese forgery market. A display case was smashed in the raid after a disc cutter was used to create a hole in a back wall

Roger Keverne, 66, a London-based dealer who specialises in Chinese ceramics and works of art, was contacted by the museum following the theft. He also worked on the separate inquiry into the theft of £2m of Chinese art from Durham University’s Oriental Museum on 5 April – later recovered by police.

Initial estimates valued the art – mainly jade and dating from the 16th and 17th Century Ming and Qing dynasties – at between £5m and £40m.

But Mr Keverne said he believed the pieces were worth a “six-figure sum”.

“The point is they’re almost worthless to the people who took them because everyone will know what they are and where they came from,” he said. “Their only real value is in being back on display in the Fitzwilliam Museum where they belong.”

He said very little in the art world was stolen to order and believed it was more likely to have been an “opportunist theft”. Mr Keverne said it was possible, however, that the items had been taken to China. “They could have gone there, but it would be very difficult to sell them openly,” he said. “However, it is a very large country and things could disappear. They may even have made their way into the forgery market. “It’s a massive industry and if you have the original to work from, you have the very best template. “But it’s more likely they’re sitting under a floorboard somewhere waiting for the value to go up or for them to be less ‘hot’.”

On the black market, the pieces would be worth only a “tiny amount” of their “real value”, he added.

Dick Ellis, 63, who headed the Metropolitan Police’s Art and Antiques Unit for 10 years until he retired in 1999, said art had become a “natural target” as prices for the commodities had risen. “They’ve seen from reports that Chinese antiquities are fetching a lot of money so they’ve set about stealing,” he said.

Dick Ellis said he did not think a “mastermind” organised the theft “These people don’t set out with wads of money to invest as you would if you’re a collector, so anything they steal is sheer profit.“When they target these objects, they do so not with the expectation that they’ll be making the extremely high prices that these objects would fetch if they were able to sell them on the open market, which they know they can’t do. “They’re relying on being able to shift these pieces relatively quickly, not for a huge amount of money, but every penny of that is sheer profit to them.” 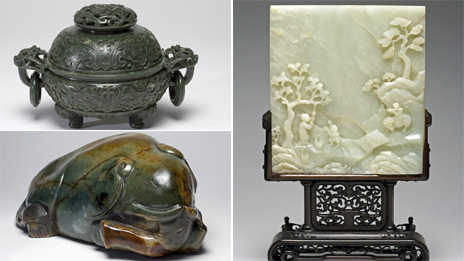 Mr Ellis, who works for the London-based Art Management Group, believes the art could have been passed through a network of “middle-men”. “They then take the risk of being able to sell the objects on, either using the internet sale platforms which are increasingly popular to sell arts and antiques, or using the large fairs which attract dealers from the continent,” he said. Until investigators discover “new lines of inquiry”, however, the Fitzwilliam Museum remains without part of its permanent collection of Chinese art.