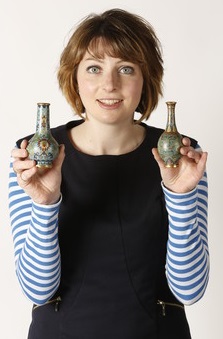 (Irv) Remember we talked about these pieces here

A 5” high Chinese vase has sold for more than five times its estimate at Duke’s Auctioneers of Dorchester. The tiny cloisonné enamel vase dated from the Reign of Emperor Qianlong and carried the all-important six-character reign mark for this Emperor who ruled China from 1735-1796. Under his reign, the arts reached a pinnacle of achievement and items from this period bearing this mark, indicating the item was made for use within the Forbidden City in Beijing, are highly prized.

The vase came from a house in Somerset and was inspected by Duke’s Asian Art specialist Andrew Marlborough. Though the vendors felt the vase could be of some value, they were surprised to find out just what a discovery they had in their possession. Andrew Marlborough said: “In addition to the reign mark, I spotted another single character mark. I had seen this mark on other similar vases before but no one had ever managed to identify what it was. I just had a strong sense that these single marks must mean something, and I suspected that this had something to do with their placement within the Imperial Palace.’

Further research revealed this vase to be part of a group of three vessels, known as ‘Lu Ping San Shi’ sets. These were three-object miniature cloisonné enamel sets made during the Qianlong period which consisted of a censer, a bottle vase and an incense container. Each of these items in these sets was marked with a single character from the famous Thousand Character Classic, a poem used to teach children the characters in their own alphabet. It is believed that the character chosen for each set, in this case the character ‘Qiang’, was also a secret code indicating a location within the Forbidden City where the set should be put on display. However, the exact location coding remains a mystery.

This is the first time that these single character marks have been positively identified by an auction house and the important discovery by Duke’s Auctioneers of Dorchester, brought additional interest to the vase on the sale day. 🙁

“The jewel-like quality of the brightly coloured enamels and the design on the body of a smiling face, enhanced the appeal making this an exceptional piece” says specialist Andrew Marlborough. At the £5,000-10,000 estimate, it was clear the vase would sell very well. At least 5 international telephone bidders fought it out and the hammer fell at £22,000 (£26,290 including buyers premium) to a Chinese bidder.

Remarkably, the auction also included another example of a miniature cloisonné vase with the character mark of ‘Gong’, found in the same Somerset home as the first. This vase was decorated in turquoise, blue, green and red floral enamels and sold for £19,520.