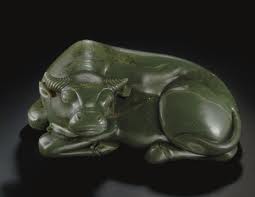 Jade is a type of gemstone used as jewellery and ornamentation. There are two main varieties of jade stone that exist – nephrite and jadeite. Their main difference is that they are composed of different silicate minerals. Nephrite tends to be the softer of the two, with the amount of iron content dictating the intensity of the green colour. Jadeite on the other hand has similar hardness to quartz. In fact, jadeite was used to craft axes, scrapers and other weapons in prehistoric Europe and Asia due to its toughness.

Nephrite stone appears in creamy white, as well as several shades of green. Jadeite boasts a wider range of colour variations. These colours include blue, emerald, green and lavender mauve. Jadeite is also harder to find, with only 12 locations across the globe. The translucent emerald green jadeite from Myanmar, also known as “imperial jade” is the most valuable and sought-after variety.

In terms of identifying fake jade, it comes down to becoming familiar with both genuine and imitation articles through close inspection of weight, colour, opacity, density and toughness. It is important to remember that there are only two varieties that are considered to be authentic jade – jadeite and nephrite; while there is a large variety of imitation jade on the market including: Serpentine (“new jade” / “olive jade”), Prehnite, Aventurine quartz, Grossular garnet (“Transvaal jade”), Chrysoprase (“Australian jade”), Malaysia jade and Mountain jade, to name a few.

Most jade on the market is composed of nephrite:

Jadeite is more rare and valuable:

It is difficult to distinguish nephrite jade from jadeite jade by only visual inspection.  Specific gravity determination is the most reliable of simple I.D. methods for distinguishing the two.

Here are a few main differences between nephrite and jadeite:

• Hardness: Nephrite: 6 – 6.5; Jadeite: 6.5 – 7. Jadeite is slightly harder and denser, and is said to take a polish better
• Specific Gravity: Nephrite: 2.90 – 3.02    Jadeite: 3.3 – 3.5
• Color: Nephrite ranges mainly from mid to dark green or grey-green, but it can also be white, yellowish or reddish. Jadeite shows more color variations, including yellow, lavender-mauve, pink and emerald-green.
• Grade: Interestingly, jadeite and nephrite are graded in reverse.  The best nephrite is clear and white, also know as “water jade.”  However, the best  jadeite today is imperial green.
• Chemical characteristics: Jadeite is a silicate of sodium and aluminium and Nephrite is a silicate of calcium and magnesium.
• Fibrous structure: Nephrite has a looser interwoven filtrons structure, whereas Jadeite has a very tight interlocking granular structure.

Jade’s durability and toughness made it an excellent material for human tool and weapon use. Civilizations across the globe recognised the beauty and functionality of jade. New Zealand’s Maori, The Maya, The Aztecs, The Olmec, ancient Swiss and Europeans all valued jade as their most valuable stone, more so than even gold.

Jade has a particular significance in Chinese culture. The Chinese call jade “The Stone of Heaven” and believe that it is a symbol of good luck, health, happiness and that it wards off evil spirits. Additionally, in Chinese, jade is translated into the word “Yu”. “Yu” can be used to describe anything that is beautiful; like a “yu” woman or a “yu” sunset. The Chinese have been working with jade for more than 5,000 years; long before they started using metals. Archaeologists have found jade objects from the early Neolithic period, represented by the Hemudu culture in Zhejian Province, and from the middle and late Neolithic period, represented by the Hongshan culture along the Lao River, the Longshan culture along the Yellow River, and the Liangzhu culture in the Tai Lake region.

Due to their long history with the gemstone, the Chinese possess the greatest examples of jade carvings and jewellery. In the late 1700’s China started importing goods from Burma (now Myanmar). The vivid green jade stone imported by the Chinese – Burmese Jadeite, caused a major shift in China’s jade heritage. From then on, imported “imperial jadeite” became even more revered than the original Chinese nephrite, which is still true to this day. Jade was made into sacrificial vessels, tools, ornaments, utensils and many other items.

White jade stone was also used to make annual tribute payments to the Chinese Imperial court. Jade stone was a popular material of choice for skilled artisans and higher value was placed on it compared to gold or silver. The presence of jade stone became prominent in ordinary daily objects such as rests for calligraphy brushes and mouthpieces for opium pipes. Jade was used for the opium pipe mouthpieces because the Chinese believed that it held power to increase the lifespan of the person smoking the pipe.

Jade had mystical qualities to the ancient Chinese, so jade wares were popular as sacrificial vessels and were often buried with the dead. To preserve the body of the dead, Liu Sheng, the ruler of the Zhongshan State (113 BC) was buried in a full jade burial suit made up of 2,498 pieces of jade, held together by golden thread.