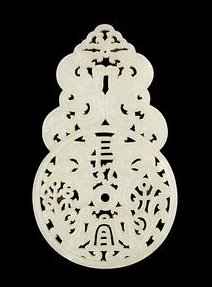 Two rare Imperial jade carvings retrieved from the Summer Palace in Peking by Captain Arthur Forbes-Robertson, an officer in the 67th Regiment of Foot, after the fall of the Chinese capital in October 1860, will be sold at Bonhams Fine Chinese Art Sale on November 8. These items come from a Scots family.

The first of the two exceptional jade carvings is a fine and rare Imperial white jade archaistic pendant, still with its original box, dated 1811 and corresponding to the Jiaqing reign (1796-1820). Finely carved and pierced in openwork, the pendant encloses four characters which translate as: “benefit for sons and grandsons forever”. It is flanked by two pairs of phoenix – mythical creatures often associated with the empress. It is 13cm (5in) long and is estimated to sell for £60,000-100,000.

The second item from the Summer Palace is a rare Imperial pale green jade archaistic hanging vase and cover estimated to sell for £40,000 to £80,000.
Of archaic form and design it is flanked by a pair of loop handles attached to the loops at either end of the swinging overhead arched handle, each side finely carved with a taotie mask with vertical notched flanges in the center and on the sides beneath a band of mythical beasts, the cover surmounted by an oval finial, similarly decorated with flanges and stylised scrolls, the jade is of greenish white tone.

Arthur Forbes-Robertson was born at his family’s Hampshire home in 1834 and joined the 67th Foot (the South Hampshires) as an Ensign on 20th October 1854. Whether or not he was inspired to enlist by the prevailing War with Russia is conjecture but, in the event, the men of the 67th were not sent to the Crimea and remained either at their depot in England or in Trinidad where some companies were garrisoned. It is unclear which option applied to young Arthur Forbes-Robertson but, wherever he was stationed, his training had progressed sufficiently well for him to be promoted Lieutenant a year later, on 30th October 1855. By 1858, Forbes-Robertson was with his regiment in the East Indies until, as a result of the escalating crisis in China, they were ordered there in September. Serving throughout the subsequent operations to capture Peking, including the spirited action at Sin-ho, the taking of Tang-ku, and the storming of the (Inner) Taku Fort, Forbes-Robertson was then selected to be one of the officers who, with men under their command, formed part of the Guard of Honor for Lord Elgin, the British plenipotentiary, at the formal signing of the peace treaty which ended hostilities on 24th October (1860). Between that date and 7th November, when the regiment marched out of Peking, it is recorded that “some British officers and men (of the 67th) had made their way to the Summer Palace in hopes of securing some of the spoil before the French took everything” and it is clear from family records that Arthur Forbes-Robertson was one of their number.

Whilst most of the China expeditionary force either returned home or were despatched to other stations, the 67th was amongst those units which remained in occupation to ensure Chinese compliance in their treaty obligations. This occupation continued, in fact, for over three years, during which the 67th suffered more than its fair share of mortality rates thanks to the unhealthy summers and exceptionally cold winters. Sadly, Arthur Forbes-Robertson, by now promoted Captain (in July 1861), was one of these victims and he died of cholera in the Confucian Barracks at Shanghai, where the regiment was stationed, on 24th July 1863.

The campaign medal for the Second China War (1857-60) was issued in 1861 and Captain Forbes-Robertson received his with the battle clasps for Taku Forts 1860 and Pekin (sic) 1860 to denote his participation in both operations.

Historical background to the 67th Regiment’s involvement in China:

The first Anglo-Chinese War, the so-called ‘Opium War’, ended in August 1842 with Hong Kong Island ceded to Britain in perpetuity and China compelled to pay a huge indemnity of 21 million dollars. Not surprisingly, the Chinese bitterly resented these concessions and both nations soon found themselves involved in numerous perceived breaches of trading agreements, the frequency of which increased as time passed. After fourteen years of uneasy peace, matters came to a head in October 1856 when British forces mounted an attack on Canton, albeit with little success due to the shortage of troops caused by the demands of the Indian Mutiny. Once the Mutiny was quelled however, and seasoned troops could be despatched to China, events moved quickly; Canton was captured in January 1858 and a treaty was signed at Tientsin that May. Unfortunately, it rapidly became clear that the Chinese viewed the new treaty merely as a ‘breathing space’ to rearm their forts and, the following year, additional reinforcements were summoned.

Embarking from Hong Kong on 21st September 1859, the 67th Foot, numbering 34 officers and 805 other ranks, landed at Canton on 23rd October. After wintering in barracks, the regiment, in company with the 99th, took and briefly occupied the island of Chusan as a precursor to Lieutenant-General Sir Hope Grant’s intended advance up the Pei-Ho River towards Peking. His first objective was to capture the strategic forts at Taku, which guarded the lower stretches of the river, and, although these were successfully stormed on 21st August 1860, the objective was only achieved after very heavy fighting at Sin-ho and Tang-ku where the 67th distinguished itself in both locations. Even though the walls of the formidable ‘Inner’ fort at Taku had earlier been damaged by British artillery, it still required the most intensive hand-to-hand fighting to gain entry but the officers and men of the 67th ‘carried the day’, and the regiment won four of the five Victoria Crosses awarded for the action.

With the fall of the Taku Forts, the way to Peking lay open and Hope Grant’s force, including the 67th, reached the outskirts of the city on 5th October. Preparations for the assault commenced immediately and the 67th was assigned the task of taking the great northeast gate. Somewhat unexpectedly however, just before the expiry of the allied ultimatum at noon on the 13th October, the Chinese capitulated and the 67th, instead of storming the gate, were able to take possession of it without a shot being fired. The visit of curious British officers and men to the Summer Palace soon afterwards was quickly regulated by General Hope Grant who ordered that “all plunder be pooled and distributed officially on a definite scale according to rank”; although this order was rigidly applied to coin and bullion, it does not seem to have been enforced with regard to objects and furnishings.

Once the final peace treaty was in place, Hope Grant was anxious to get his troops out of Peking before the winter set in and the 67th was ordered to Tientsin and Taku on occupation duties. Even though the 67th transferred to Shanghai in May 1862, some companies remained at Taku as late as January 1864 and were among the last British soldiers to leave China. Before that final withdrawal, the regiment lost numerous officers and men during a serious cholera epidemic in Shanghai in July 1863 although the 67th enjoyed its ‘final hurrah’ in the country helping to train and later serving alongside General ‘Chinese’ Gordon’s ‘Ever Victorious Army’ during the Taiping Rebellion in the second half of 1863.