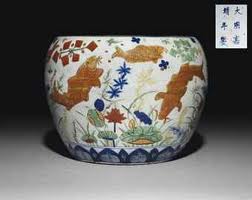 Jiajing Emperor was the cousin of the former Zhengde Emperor and the 11th Ming ruler to reign the dynasty. Jiajing ascended the throne as a result of the sudden death of Zhengde Emperor, who did not leave an heir. According to ancient Chinese tradition, the emperor who was not an immediate descendant should be adopted by the previous one to retain the dynastic line. Jiajing was against this, which lead to a political conflict known as “The Great Rites Controversy”. The emperor prevailed which lead to many of the court to be banished or otherwise ruthlessly executed. This served as precedent for Jijing’s cruel and egocentric reign over the Empire.

As a whole, the wares of this period are variable, however they are generally distinguished by a brilliant rich shade of blue, sometimes tinged with violet. The decoration is generally freely treated like a wash drawing. As Jiajing was a devout Taoist, the imagery became omnipresent in the decoration of the period. Taoist symbols, such as the Eight Immortals, or the Symbols of Longevity, reflecting the emperor’s deepest influences, are predominant on the Imperial pieces. Even the shapes of the wares were in some way affected by the rampant Taoism. The double-gourd vase shape was a popular symbol of longevity and is associated with the Daoist Immortal Li Tiegui, who is depicted holding a double gourd containing the elixir of immortality.

On the regular, everyday wares the classical themes of children at play, dragons, phoenixes, and floral motifs are found. These pieces used to be fairly easy identify but are becoming more and more rare on the world market.

Although not very common during the mid-to-late 15th century, the monochrome wares made a re-appearance during Jiajing’s era through to the Wanli period. The yellow, so-called Imperial monochromes (for this colour was reserved for the court) appeared at the end of the 15th century. The chief characteristic of these Ming monochromes is not so much their colour, but the marbled appearance of their enamel glaze. It is like this on the rims of cups or dishes and thicker on the bases. These slight imperfections make it possible to distinguish the Imperial yellow wares of the Ming period to those of the 18th century which sometimes bear the same Ming mark.

The bases of the original Ming pieces are slightly concave and sometimes the mark is incised under the glaze, though it is generally painted on in blue. Copper red monochromes also occasionally appear during the Jiajing period, with enamel being sometimes directly applied to the biscuit.