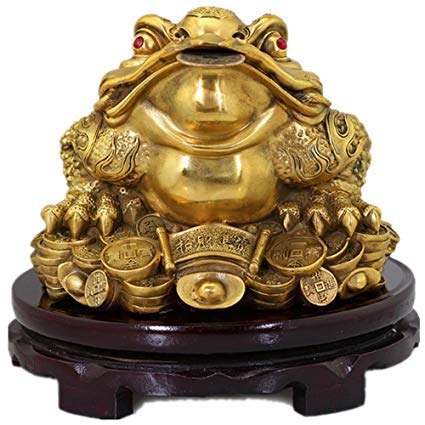 The toads have three feet with a coin in its mouth which can spin, two strings of coins running down its back, and the big dipper constellation on its back. The Jin Chan carries a lot of symbolism with it and has some interesting legends. It is believed that having one in your property will bring you luck, wealth, and prosperity.

In the toad’s mouth is a coin which spins. In Chinese the word “Zhuan” which means spin, or go around, sounds the same as the Chinese word for earn. So the spinning coin means that money will keep coming round and round. Traditionally in China, coins came on strings and many items were counted by strings of cash, so the two strings on the Jin Chan’s back symbolize having lot of wealth.

Positioning of the Toad

There are quite a few legends concerning the Gold Toad. Each area of China has its own versions. Below are listed a couple of the most common ones.

In China’s ancient past, the three footed toad was an evil animal. It was incredibly powerful with a lust for treasure. The toad would go to any means in order to obtain more treasure, including murder. There was a Daoist Monk named Liu Hai, a follower of the Immortal Lu Dongbin, who was compassionate and cared deeply for people. He saw what the evil toad was doing to people and decided to try to stop him. He cornered the toad at the entrance to his treasure cave and battled him for many days and nights. In the end, he beat the three footed toad. The toad lay at his feet dying, expecting to be destroyed, but Liu Hai nursed him back to health. To repay Liu Hai for his kindness, the three footed toad became loyal and kind and from that day forward he helped people search for treasure.

Before the dawn of history, the toad was a powerful animal. It killed and ate humans and animals alike. He would kill not just for food, but for the enjoyment of it, wiping out entire villages’ livestock. Liu Hai, a Daoist Monk was sympathetic to the plight of the people and decided to put an end to it. He fought the toad for many days and during the ensuing battle he cut off one of the toad’s legs. At the end of the battle, Liu Hai didn’t have the heart to kill the toad, so he bandaged his wounds and nursed him back to health. The toad was thankful for his kindness and chose to follow Liu Hai as his master. Thereafter, he helped mankind and would give people in need, gold and silver.