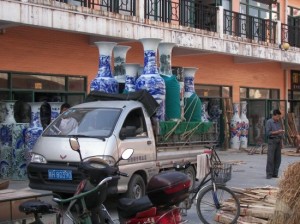 Jingdezhen, a medium-sized city in China’s Jiangxi province also known as the Porcelain Capital of China, is well recognized for its efforts in protecting an important piece of humanity’s intangible cultural heritage. A group led by UNESCO consultant Emma Chen Hoefler, simultaneously the vice president of the folk art international organization IVO, the president of IVO China and an expert in the field on the protection of cultural artifacts with intangible value, paid a visit to Jingdezhen between the 8th and the 10th June, 2013, where she conducted field research on the city’s efforts in protecting its heritage.

During their visit, the group led by Emma Chen Hoefler inspected the Jingdezhen Ancient Kiln and Folk Customs Museum (a.k.a. Jingdezhen Ancient Kiln), the sole ceramics-focused exhibition site in China, held in-depth exchanges and discussions with the owners of the artifacts and their means of production as well as with executives of ceramics culture companies, ceramists as well as commercial designers and artists and had a close look at the skill sets in relation to the genuine preservation of the cultural heritage including production, manufacturing, processing and maintenance of traditional standards concerning Jingdezhen ceramics.

Notably, on the afternoon of the 10th of June, a few days following evaluation of Jingdezhen’s application for world heritage list, Jingdezhen’s Ming Dynasty Gourd Kiln, which was reactivated on the 2013 National Cultural Heritage Day, showcased approximately 1,000 porcelain masterpieces to visitors. The exquisite masterpieces, which previously experienced firing at the high temperature of 1,360 degrees Celsius, received praises and cheers from on-site visitors.

The Gourd Kiln is a gourd-shaped wood-fired ceramic kiln dating back to the Ming Dynasty. From the air, the kiln looks like the vegetable it is named after, with the front larger than the back. The uniquely-shaped kiln was set up during the late Yuan and early Ming dynasties and was discontinued during the early Qing Dynasty period when the egg-shaped kiln (Zhen Yao) emerged. The Gourd Kiln has been well documented and illustrated in the Tiangong Kaiwu, a work created by Song Yingxing during the Ming Dynasty. The Gourd Kiln combined the advantages of the dragon-shaped kilns and steamed bun-shaped kilns of the Song and Yuan dynasties and featured notable improvements in firing techniques, making a significant contribution to the development of ceramics in Jingdezhen during the Ming period and the design of kilns during the Qing period.

Emma Chen Hoefler said she was impressed by the fire-lighting ceremony inaugurating the reactivation and operation of the kiln. She added, “Although I am a long-time aficionado of exquisite, beautiful and splendid porcelains, I was not aware of the manufacturing process before I came to Jingdezhen. When I attended the ceremony, my feeling was just as Hegel once said, ‘history is a pile of ashes, but it still feels you.’ I witnessed the entire manufacturing process from throwing to being placed inside the kiln. I think the Gourd Kiln reactivation represents a significant contribution to the preservation of traditions in Jingdezhen and brings us an opportunity to know how hardworking craftsmen create these fine porcelains manually starting from mud – it is something that truly enriches everyone’s spiritual life.”

On April 11, 2013, the Jingdezhen Ancient Kiln was approved as a “National AAAAA Scenic Spot”, raising the number of 5A-level scenic spots in Jiangxi Province to six and becoming the first and only national 5A scenic spot with ceramic culture as the theme. On October 3, 2011, Shao Qiwei, Chairman of China National Tourism Administration said during a visit to Jingdezhen that “cultural tourism in Jingdezhen, known as the Porcelain Capital, can be developed into an international brand. The Jingdezhen Ancient Kiln is not only a treasure of Jingdezhen, but also a world cultural heritage spot.”

Chen Wuping, director of the Gourd Kiln site, attributed the success of the historical kiln to a perfect balance between its cultural importance and the tourism that has developed around it. Specifically, the kiln takes the lead in showing the world the culture of the 1,000 year-old Porcelain Capital. In addition, the visitors impressed by the charm of the kiln serve as volunteer promoters. The historic kiln is appreciated by people from all walks of life. Since May of this year, visitors can view porcelain works depicting the 12 animals of the Chinese zodiac in the same dimensions as those on the fountain head in the Old Summer Palace, or Yuanmingyuan. These 600,000-yuan (approx. US$98,000) porcelains spouting water are located by the entrance to the scenic spot and serve as a welcome to visitors. Visitors can also watch the spectacular song-and-dance performance—“Ancient Kiln Impression- Waiting for you in Jingdezhen”. More surprises await you here in 2013!

As the ancient kiln site has just been named as one of China’s 5A scenic spots, people working at the kiln site are enthusiastic about making what Shao Qiwei said a reality. They plan to continue improving services and add new scenic spots as per their working plans, and hope that within a short time, Jingdezhen’s traditional calcining and firing skills can be declared an “intangible world heritage”, and that the ancient kiln can become a famous world-class tourist scenic spot.

China is an Old World country with a long history and tradition of ceramics making, and Jingdezhen is the epicenter of where this art and craft flourished. In the over 1,700 years of ceramics making, Jingdezhen has been home to the design and building of many famous kilns as well as of skilled workmen who came from all over China to study and become masters in this great center of learning. Hundreds of generations worked here to create unparalleled achievements through ceramic making’s long history, eventually evolving into a very unique and original style famously expressed in Chinese descriptively as “as white as jade, as clear as a mirror, as thin as paper and the sound like a chime.” Jingdezhen Ancient Kiln Folk Customs Museum is the preferred destination for tourists who want to experience the most quintessential elements of ceramics culture in Jingdezhen and for aficionados who will deeply appreciate the breadth and depth of the porcelain capital’s history and culture.

The kiln’s slogan, “North to see the Forbidden City, south to visit the ancient kiln”, reflects the rich and abundant ceramic culture, as well as the great aspirations of all the kiln’s craftsmen and supporters. We all anticipate that this ancient kiln, which was recently used as a site in and backdrop for many scenes of the “Liang Jian” TV series, to take a prominent place in many more events associated with traditional ceramic culture.