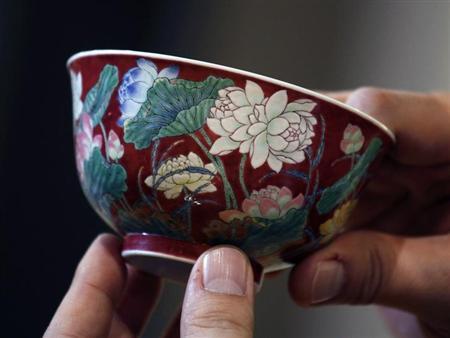 A red bowl with a lotus pattern broke the world record for Chinese Kangxi ceramics on Monday, fetching over $9 million after a bidding war won by a Hong Kong ceramics dealer at the last day of spring sales for global auctioneer Sotheby’s.

The five days of sales in wine, jewellery, Asian and Chinese art, ceramics and watches, an indicator of China’s appetite for luxury goods, are being keenly watched after sluggish economic growth in 2012 and a crackdown on lavish official spending.

The Ruby-Ground Double-Lotus “falangcai” bowl from the Kangxi period of 1662-1722 went for HK$74 million, handily beating pre-sale estimates of HK$70 million and selling for more than 140 times the price paid three decades ago in a sign of surging demand.

More than 400 customers turned up for the auction of 57 ceramic pieces in the morning session, with several rows of people packed into the back of the auction room and telephone lines busy with bidders. The bowl ultimately went to Hong Kong ceramics dealer William Chak.

“Of course, at the very, very top of the market, you do have lots of participation from overseas and other parts of Greater China,” said Nicolas Chow, Deputy Chairman of Sotheby’s Asia and International Head of Chinese Ceramics and Works of Art.

“But in terms of quantity, the largest quantity of objects traded today of Chinese art go back towards the mainland.”

A mainland collector who gave his name only as Ren and was bidding for a friend said demand for Chinese ceramics was growing among mainland buyers.

“Of course we’re interested in these things. There’s a Chinese element in them and they are the things from our ancestors, so we always feel attached to them,” he added.

Though the auction scene in Hong Kong has long been dominated by international goliaths like Christie’s and Sotheby’s, leading Chinese auctioneer China Guardian last autumn muscled in on their turf with a debut sale and held another last week.

Chow said this trend was “a great thing”.

“That helps draw more people towards Hong Kong and makes Hong Kong an even greater centre for the art trade, particularly in this field,” he told Reuters.

Sotheby’s sold HK$2 billion worth of Asian and Chinese artwork and luxury goods at its autumn sales in Hong Kong in October, down 37 percent from the same period a year earlier.