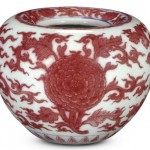 When the Kangxi Emperor came to the throne he immediately began to show an interest in the production of imperial porcelain. Even before he dispatched a commission to report on the state of the imperial kilns and subsequently to rebuild them, the imperial potters were encouraged to experiment, improve and rediscover, even as early as the 1670s, painting on porcelain in underglaze copper-red.

Not content with rediscovering the technique of painting and firing with underglaze red, potters during the Kangxi reign also experimented with new styles. One of the most successful endeavour of these new styles is that of painting formal designs using very fine outlines, as seen on the current water pot.

Firing underglaze copper-red is very difficult, requiring the precise control of heat, kiln atmosphere and air circulation in the kiln, as well as the careful preparation of the copper pigment. The most notable qualities of the present vessel are seen in the well-executed pencilled floral designs, and the bright raspberry tone of the copper-red which is closely related to that of the peachbloom glaze. 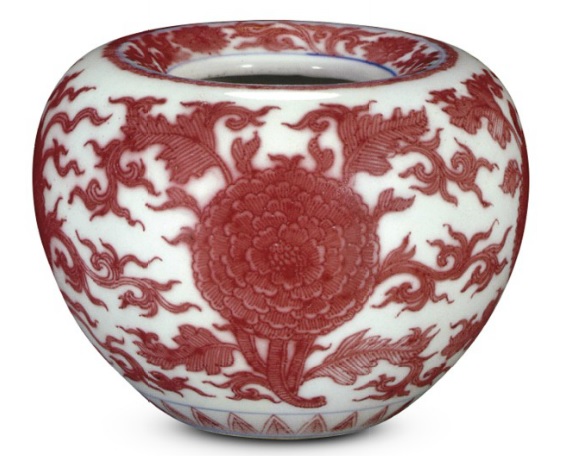