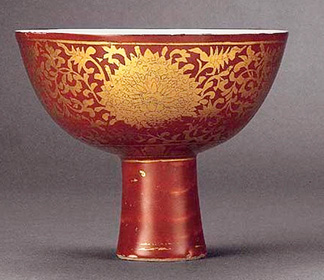 Kinrande (meaning “gold brocade”) is a style of porcelain popularised in China during the middle years of the Ming Dynasty. This style became a popular export to Japan and was distinct for its dazzling, intricate and colourful decoration. It was called “gold brocade” in reference to textiles woven through with gold thread to produce a luxurious gold pattern on a coloured ground. This technique however, did not originate in the Ming period, rare porcelains from the Ding kilns of the earlier Song Dynasty already featured golden decorations.

These wares generally tended to be of fine quality, with a thin, even glaze. Furthermore, the underglaze blue was of a very fine quality typical of Chinese Doucai. The Japanese-influenced decoration patterns included floral patterns such as chrysanthemums and were found predominately in red, blue and golden colour.

The pieces can be recognised by their distinctive coral-red ground enamel with gold leaf decoration. These wares were costly to produce and required a very labour intensive process. The underglaze blue porcelain was enamelled all over with iron red and fired at high temperatures. Then a layer of gilded decoration was added onto the pieces, cut in sections from gold leaf and adhered with lacquer, then fired again at a lower temperature.

A wide variety of marks were used on Kinrande ceramics of the Jiajing period. Some were Imperial reign marks, others included the date, place of production and even messages of good luck and fortune.