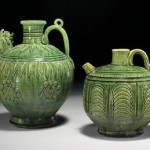 In the early 10th century, a nomad people of Mongol origin, the Khitan, conquered Manchuria and in 907 founded the Liao dynasty. They set up their capital at Shangjing on the modern province of Balin, now the town of Lingdong. The Liao dynasty crumbled in 1125 under the simultaneous attacks of the Jurchen, a sinicized people from Manchuria, and of the Song, tired of paying tribute to conquerors they continued to regard as “barbarians”. Diplomatic relations between the two states had never been interrupted, the Liao forever seeking to imitate and excel the Song in luxury and refinement.

Liao pottery was little known before 1936, when it attracted the attention of the Japanese, who had just created the autonomous state of Manzhuoguo. The collection of General Tang Yulin, who was the first to take an interest in Liao kilns, forms the basis of the Mukden (now Shenyang) Museum. Undeterred by war and the general insecurity reigning in the countryside, Japanese archaeologists made surveys and discovered the main centres of production of these wares.

The chief credit goes to Mamoru Yamamoto, Shigeo Kodama, Shinobu Uehara and Takeichi Saito. Some sites were visited in 1940 by Fujio Koyama, who published an account of his journey in the Transactions of the Oriental Ceramic Society. Another significant text is the catalogue of the exhibition named “Ceramics of the Liao Dynasty” held at Asia House, New York, 1972, in which Mino Yutaka described the most recent discoveries. From these recent studies, it can be affirmed that the Liao did not merely receive pottery as tribute from the Song but created their own stoneware and porcelain industry. 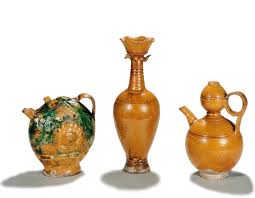 In 1939, Yamamoto Mamoru discovered traces of small hemispherical kilns on the site of ancient Liao capital of Shangjing in the present town of Lindong. Numerous shards were found in the area belong to the Ding type of porcelains, other shards, equally numerous, are of stonewares and black glazed pottery, or from wares with superb green glaze. Very diverse pieces have been dug up in the region. Kilns producing sancai or the three-colour wares and white-glazed low-fired wares have been found five hundred metres from the southern tower of the ancient fortress of Shangjing. Some kilns discovered two kilometres south-west of the town seem to have specialized in the manufacture of large stoneware jars. These are described in Japanese catalogues as in the shape of “chicken legs”. They must have contained fermented drinks and were half buried in the ground to speed up the process of fermentation. They are covered with a greyish-green glaze sometimes tending to yellow, a colour called “tea dust”.

Near the town of Chifeng, the Japanese discovered helmet-shaped kilns, larger than those of Shangjing and closely similar to those used by the villagers at the beginning of this century. In the same district were dug up shards of sancai pottery, green and yellow monochromes, fine quality white porcelains of Ding type and also Song period Cizhou wares which are those painted in underglaze iron pigments on a white slip.

Lastly large numbers of kilns have been discovered in the province of Liaoning; some of them continued production into the Yuan period. The objects excavated show them to have produced Ding porcelains with a slightly yellow tinted glaze, or rather rough stonewares of the Cizhou type. There were also ordinary stoneware vessels for everyday use, covered with a black glaze.