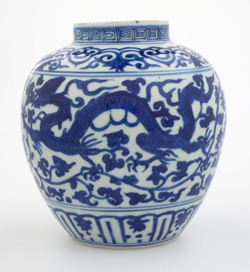 Longqing was the 12th Emperor to rule the Ming Dynasty in China. He inherited the country in a state of disarray, due to the mismanagement and corruption at the reign of his father, Emperor Jiajing. He set about reforming his father’s policies and employing more competent officials while at the same time banning the corrupt eunuchs from court. He also re-opened trade with other nations in Europe, Africa and other parts of Asia. Although initially Longqing brought promise as an adequate Emperor, he eventually succumbed to the same vices as his father. He became more involved in Taoist philosophies and personal fulfilment towards the end of his reign.

Few pieces bear the six character mark of this short reign, therefore it is difficult to distinguish its style from that of the two great periods of Jiajing and Wanli. 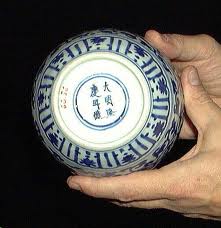 It was a period of financial restraint, and the Jingdezhen kilns had their budget restricted. Notable historian Lan Pu, however, described the wares of this period as follows: “The clay is adhesive and rich. The body partly thick, partly thin. The are blue-and-white, as well as five colour wares found in this era. The technique of manufacture is excellent – the glaze lustrous and thick like a layer of fat.” This appraisal is confirmed by one of the very few items bearing the period’s mark – the cricket cage displayed at the Fogg Museum at Harvard University. The porcelain box is coloured in ornamental blue-and-white decoration, and was used for holding crickets. Cricket fights were much in fashion during the Song and Ming periods, bringing about such unusual porcelain pieces.