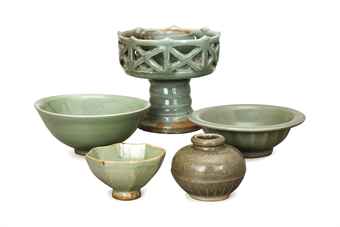 The Longquan kilns are considered among the most characteristic kilns of the Song Dynasty, located also in Zhejiang Province, with kilns at Longquan, Dayao, Jincun and elsewhere. It was established during the Five Dynasties Period and inherited the traditions of the Yue kilns, mainly in the discipline of celadon production.

By the Southern Song Dynasty (1127-1279 AD), the Longquan kilns had reached the peak of their achievement. Longquan celadon excelled in the texture and colour of its glaze. Thick and smooth, the glaze was as beautiful as jade, and came in many colours, including moon-white, pea green, light blue, crab shell red, and cream. The most attractive were the Fenqing and plum green glazes. Glazed Fenqing Longquan porcelain appeared slightly cloudy, light milky-green in colour, and easy on the eye. Plum green glaze was deeper and lustrous in comparison; it was jade green with spots of transparency, much like a fresh sour plum. The creation of these two glaze colours was made possible by improvements in firing technology and porcelain crafts.

Longquan porcelain used alkaline-calcareous glaze, rather than lime glaze, an innovation that improved the quality and appearance of the wares. This glaze can be thick, yet fully vitrified, so that air bubbles can expand. The surface of the glaze was soft and elegant, lending it the qualities of jade. Longquan porcelain wares had complex designs and forms. Aside from vessels for daily use, porcelain stationary items and porcelain imitating ancient styles were also produced, including vases, gu, cooking vessels, and stoves. As for decorative patterns, new techniques included embossed sculptures and applique patterns.

Yuan Dynasty Longquan porcelain was shipped and exported overseas in vast quantities; more kilns were set up to meet with increased demand. Thus, the Longquan celadon wares were an important part of China’s export economy for over five hundred years.