I have always found Lyon & Turnbulls to be a professional outfit, their Asian art specialist is a guy called Lee Young and in my opinion he is one of the most honest and genuine guys in the business, he always aims to put a good sale together and researches everything to the best of his ability, he will truthfully tell you whether a lot is trade or private and has always been very approachable and friendly, in fact the whole buying experience with this firm is a pleasant one, a very rare commodity these days. True Professionals! 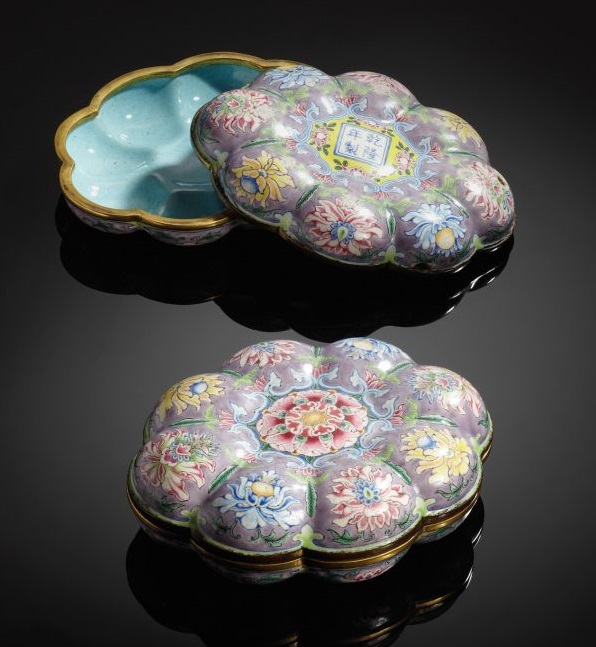 I would happily give £12,000 for these fabulous Canton boxes, mark my words these will fly, i have a large bid myself on these items but i know my bid will not be enough – stunning stunning pieces.

Lot Description: PAIR OF CANTON ENAMEL FLORIFORM BOXES AND COVERS ONE QIANLONG MARK AND PERIOD, THE OTHER OF A LATER DATE of eight lobed compressed form, a central medallion with star shape framed by ruyi heads, each lobe with lotus flower heads in yellow, rose and blue, framed by upright green leaves, all on a lavender ground, the reverse with four character mark of Qianlong in blue enamel on a white ground within a double square on a yellow ground with further lotus, the base similarly decorated with lotus, the interior with a light blue enamel, on a gilt copper ground (2) 12cm long, 3.5cm high.

I was initially all over this piece as period ones have sold for £100,000 plus, after closer inspection i am not convinced the alms bowl is Qianlong.

The alms bowl is a symbol of the Buddhist monk, and by Buddhist law is the only item a monk is allowed to possess. The Qianlong emperor was a devout Buddhist, and numerous Buddhist implements and artworks were created under his direction. Many examples of alms bowls made during his reign in jade, cloisonné enamel and lacquer are evident, although alms bowls made of porcelain are relatively rare.

Another blue and white-decorated porcelain alms bowl, dated to the Qianlong period, is illustrated in The Complete Collection of Treasures of the Palace Museum – Blue and White Porcelain with Underglaze Red (III), Hong Kong, 2000, p. 156, no. 142, where it is noted that during the third year of Qianlong’s reign, as recorded in the Qianlong Jishidang (Records of Qianlong), that the Imperial kilns received an order to create an underglaze blue and white alms bowl in the Xuande style, which is believed to be the bowl retained by the Palace Museum. 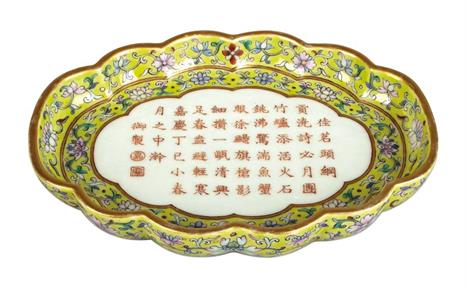 I did not even pick this up and look, pointless as every man and his dog knows exactly what it’s worth if period.

AN INSCRIBED AND DATED LIME GREEN GROUND FAMILLE ROSE TEA TRAY JIAQING SEAL MARK AND OF THE PERIOD, DATED 1797 of quatrefoil form raised on four low bracket feet, painted in the centre in iron red with an Imperial poem, enclosed by scrolling sprays of lotus and other flowers in famille rose enamels within gilt borders reserved on a lime green ground, with an iron red seal mark to the base 16cm wide Note: The inscribed poem reads: Fine tea is a great gift for an emperor, drinking and writing poetry by the light of the moon, Adding new fire to the bamboo stove, the water boils like rushing waves, Tea leaves flutter like fish and crabs eyes, gathering like shadows of banners and spears, A cup of tea clears the mind, and keeps away the cold chills of spring. For a similar tea tray, see Sotheby`s, 15 May 2013, lot 319 Estimate: £2,000 – £3,000 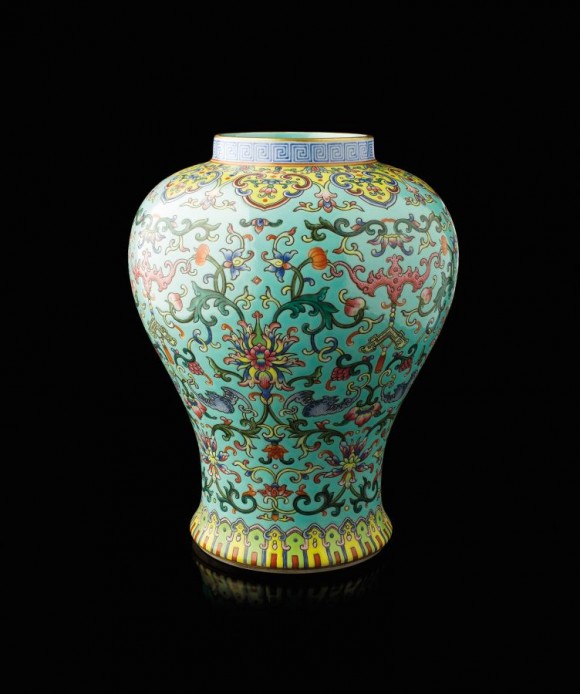 I am certain this is the same vase that went unsold in Christie’s on the 15th of May 2012.  See Christie’s vase and description below for comparison. 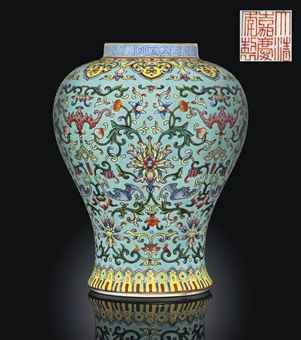 The vase is decorated with bats surrounded by large stylised lotus blooms with delicately painted leafy stems, all below a large ruyi-shaped band to the shoulder.

I quite liked this large Ming bowl but the estimate is too high.

Description: Lot 342 A FLAMBE GLAZED VASE YONGZHENG SEAL MARK AND OF THE PERIOD of elongated pear shape, the sides with…

Again pointless even looking at this piece as it did the rounds during Asia week in London and if period will make exactly what its worth.

Too many modern pieces of bronze & porcelain wrongly described as old, also disappointing to see the majority of Jade on offer is also modern. To be fair the sale is a lot better than most provincial Asian art sales and there is enough genuine pieces on offer to make the sale a worthy trip, the staff are great as is the service.

The estimates are way too high on a lot of mediocre items, but i fully understand there will be pieces with reserves hence the high estimates.