The rounded sides painted in cobalt-blue with a scene from the poem ‘Eight Immortal of the Wine Cup’ by Du Fu, the central seated figure of Li Shizi drinking from a wine cup surrounded by attendants carrying ewers and further cups, in an interior with vases and a scholar’s rock, the reverse side with inscription describing the scene, six-character Kangxi mark within double ring to the base, with original fitted zitan box
6.7cm diam

The poem on the reverse reads:

“The Premier [Li Shi-zhi] spends ten thousand cash each day [on drink]; his imbibing matches the great whale’s gulping down of the hundred streams; holding the wine cup, joyous sage, he calls himself ‘avoider of the worthy'”.

The Eight Immortals of the Wine Cup were a group of scholars renowned for their love of alcoholic beverages. The extract above is from a poem dedicated to them by the acclaimed Tang poet Du Fu. Li Shizi, Duke of Qinghe (died 747), is the third Immortal to appear in the poem. He served as a chancellor during the reign of Emperor Xuanzong. Li Shizhi particularly enjoyed entertaining guests and was said to be able to drink two litres of wine without losing his lucidity.

This cup would have been part of a set of eight, each depicting one of the Immortals. For an example of a similar cup with another Immortal, Su Jin, see Christie’s Hong Kong 2009, lot 1895.

You can view the full sale HERE 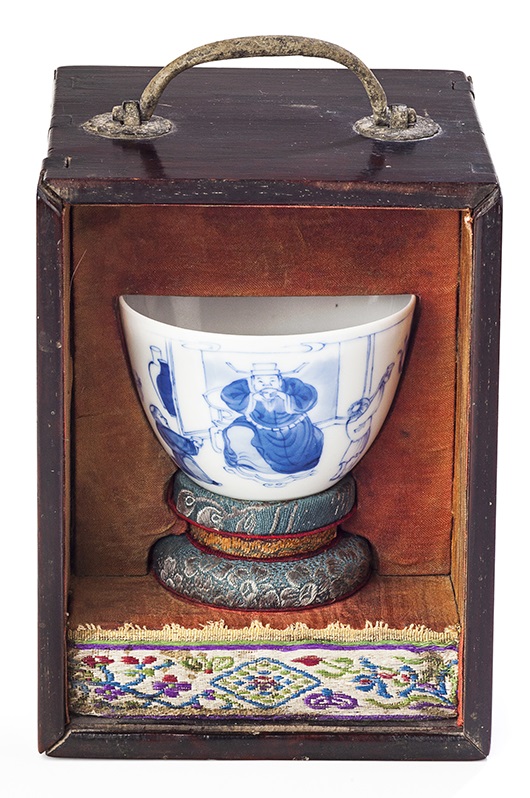