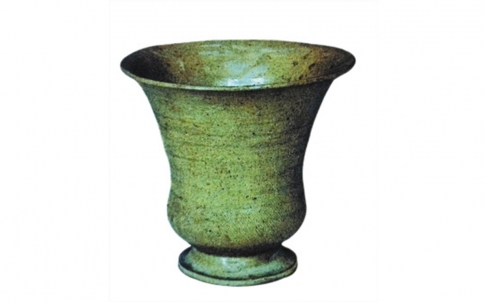 The earliest celadon – one of the most delicate types of Chinese pottery glazed with pure, green jasper – was produced at a “hi-tech” centre in Luoyang, Henan, about 3,700 years ago, according to a new study by mainland scientists.

The making of celadon wares required high temperatures, usually over 1,100 degrees Celsius, which was difficult to reach before the industrial revolution owing to technical challenges such as heat control and kiln design.

Professor Wang Changsui , an archaeometrist with the Chinese Academy of Sciences in Beijing and research leader, said the earliest celadon, uncovered in fragments from the Erlitou Bronze Age site near the Yellow River, was a “remarkable achievement” by the ancient civilisation.

“That means China had developed and mastered the high-temperature technology earlier than any other region in the world. It was not until the 17th century, or 3,000 years later, that similar kilns began to emerge in Europe,” he said.

“The Erlitou site was the hi-tech centre of the world in its time, with cutting-edge technology in a wide range of manufacturing sectors from ceramics making to metal casting. The origin of ‘made in China’ was early and glorious.”

For decades, it has widely been believed that celadon pieces had not been produced in China until the late Eastern Han Dynasty in about 200AD.

Chemical analysis on pottery fragments from an Eastern Han tomb in Shangyu , Zhejiang , showed they were created at a staggeringly high temperature of about 1,310 degrees.

Wang’s team conducted a comprehensive study of the archaeometrical data on older celadon wares and found that most of them were made at temperatures slightly over 1,100 degrees.

“From 1,100 degrees and above, a series of critical transformations took place, such as vitrification,” he said.

The Erlitou celadon was previously regarded as primitive glazed earthenware, but was in fact made at similar temperatures with the same technology as most celadon pieces discovered in more recent history, according to Wang’s study.

“Technologically speaking, they are the same as celadon made in the Ming and Qing dynasties,” he said.

An ancient ceramics researcher with the CAS Shanghai Institute of Ceramics, who declined to be named, said that despite the new study, opinion in China and overseas still favoured the Eastern Han Dynasty being the origin of celadon.

But he added: “Professor Wang is an influential researcher in this field. His opinions have prompted a lot of discussion.”

Professor Xu Hong , a researcher with the Chinese Academy of Social Sciences’ Institute of Archaeology and a lead archaeologist at the Erlitou site, said that although there were still debates on the origin of celadon, the evidence from Erlitou strongly suggested the site was the earliest centre of Chinese civilisation.

The site, spanning about 3 sq km, covers the relics of an ancient city dating from 1,900BC to 1,500BC during the Xia period, the first dynasty in China recorded in ancient chronicles.

Since its discovery in the late 1950s, many important finds have been unearthed, including the earliest bronze manufacturing workshop, a palace, a boulevard and even wheel tracks.

“Before Erlitou, civilisations in China were small, scattered in numerous regions like stars in the evening sky. The appearance of Erlitou was like the rise of a moon that made pale the stars,” Xu said.

“With so much archaeological evidence of cultural and technology advancements, I believe here is where the Middle Kingdom begins.”