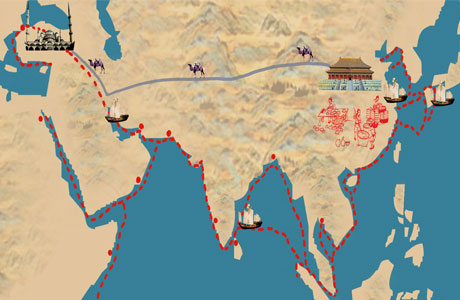 On a recent trip to Istanbul, my family and I strolled through cobblestone streets in the ancient shadows of domed mosques and spiraling minarets, our meandering gait, awestruck gaze, and open map rendering it obvious that we were tourists.  A friendly local – yes, a carpet vendor – asked if we needed directions so we inquired the way to the Grand Bazaar, one of the world’s largest and oldest covered markets.

Just saying the words – Grand Bazaar – conjured images of woven rugs and glazed tiles, Ottoman miniatures and Turkish delight, smoking hookahs and burbling fountains. Sadly, our romantic visions were shattered when the man gave us directions and then added caustically, “But be careful – almost everything there is made in China.”

We live in an era when attitudes such as this are unfortunately common. The world is glutted with Chinese-made goods and many of them are seen as shoddy, even dangerous. The response to the flood of Chinese products has grown increasingly militant, evidenced by hyperbolic books like “Death by China” – now a film, which warns against China’s “deadly consumer products” – and “A Year Without ‘Made in China,'” which describes one American’s effort “to outrun China’s reach” by boycotting anything made in China.

Of course, it wasn’t always this way.  That very morning we had visited Istanbul’s Topkapi Palace where sultans like Suleyman the Magnificent had amassed a spectacular collection of Chinese porcelain. Though the palace was full of silver and gold plates and utensils, the sultans chose to eat with wooden spoons and blue and white porcelain from China – then one of the most precious and desirable objects in the world.

“Passion for Porcelain: Masterpieces of Ceramics from The British Museum and the Victoria and Albert,”  at the National Museum of China until January, is a fascinating exhibition that harks back to this era when Chinese goods elicited admiration and desire rather than disdain and disgust.

“Porcelain was called ‘white gold,'” explained Jan Stuart, keeper of the Department of Asia at The British Museum.  “[It] really was the first global good.”

China had made pottery for millennia; the abundance of loess, blown southeast from the Tibetan plateau and the Gobi Desert, provided the perfect raw material for firing in high temperature kilns. But it was not until the Song Dynasty (960-1279) that potters at Jingdezhen created true porcelain, when they added the mineral kaolin to China-stone and cranked the kiln temperature to above 1,300 centigrade. This produced a material that was strong, translucent and white, highly suited to sculpting and decorating.

Muslim merchants who lived in southern coastal ports such as Guangzhou and Quanzhou managed the seaborne “ceramics route” that shipped Chinese ceramics to eager markets, especially the Middle East. They brought back cobalt – called “Muslim blue” in Chinese – which enabled the creation of the blue and white porcelains now so closely associated with the Ming Dynasty (many of which have decorative motifs that are also imported from the Middle East). When these traders began exporting porcelain wares, the impact was tremendous  – porcelain seems to have stunned nearly everyone who saw it.

Korea had its own rich pottery tradition and began to import porcelain-making technology from China. Japan mainly imported finished goods, but wanted to make its own porcelain – so in 1592 and 1598 it invaded Korea, captured hundreds of kiln workers and brought them back to Japan to learn Chinese porcelain-making technology. These episodes are sometimes called “The Potters’ Wars.” The Middle East imported increasing amounts of Chinese porcelain, and traders shipped some of it onward to East Africa, where it was used to adorn mosques and tombs. In some of the island cultures of Southeast Asia, which had relatively unsophisticated ceramics industries, porcelain was seen to have magical qualities, like the ability to heal the sick, call down deities, or warn of impending disaster. In one island culture, porcelain dragon jars were even “married” to one another!

When Europeans encountered porcelain, they were as smitten as everyone else. Some scholars date the start of outright porcelain “mania” to 1602 and 1603, when the Dutch captured two porcelain-laden Portuguese ships and auctioned their contents in Amsterdam. In subsequent decades, the Dutch East India Company imported no fewer than 43 million pieces of Chinese porcelain, while the other national trading companies imported 30 million. (Shipwreck evidence has shown that one boat could hold 700,000 pieces of porcelain, which was often used as ballast for tea and silk.)

European imports were largely blue and white, decorated according to Chinese tastes, but some were special orders, a number of which are on display at the National Museum. These include a blue and white jar (c.1620-44) that looks typically Ming, until you examine it closely and see hidden among the floral designs oval medallions that contain the monogram of Christ (IHS), arrows symbolizing the Holy Trinity, and the initials “SP,” which stood for the College of St. Paul in Macau. Other commissions were more secular, like a beer tankard commissioned by a Swedish sailor whose boat got stuck off Hainan Island in the winter of 1785 and a blue and white Ming jar painted with turbaned Persian archers, the design apparently borrowed from a Mughal (India) copy of a drawing from Iran’s Safavid Dynasty. These commissions provide fascinating evidence of the global cultural exchanges sparked by the porcelain trade, with colors, decorative motifs, and design concepts – from art, architecture, textiles, literature and other media – brought to China by merchant traders, reinterpreted by Jingdezhen potters, and sent back out into a welcoming world.

Besotted as they were by porcelain, Europeans soon determined to make it for themselves.

“Nobody knew how porcelain was made,” explained Stuart, of The British Museum. “The raw materials in Europe were different – the same combination just wasn’t available.”

To Europeans of the day, porcelain production seemed a lot like alchemy – a mysterious process by which clay is transformed into a valuable object of ethereal and enduring beauty – so the job of making it was delegated to alchemists in the employ of princes. The one who finally uncovered the secret in 1708 was Johann Friedrich Bottger; within decades porcelain was being made across Europe. While European porcelain incorporated many Chinese themes and styles, it also included original designs that eventually got back to China and influenced Chinese workers at Jingdezhen.  The exhibition offers a number of such intriguing pairings, like two Qing Dynasty porcelain mugs – both painted in a Japanese style known as Imari – one produced at Jingdezhen and the other at the Bow porcelain factory in London.

“Passion for Porcelain” is a historically rich and aesthetically pleasing exhibition that should be appreciated on these merits alone.  But, in this “Death by China” era, it also offers inspiration and example in its presentation of “Made in China” goods that were both the envy of the world and a product of global cross-cultural and technological exchange. To be sure, there is much to this vanished era to regret – like the opium sales that the British ultimately used to balance their ever-growing trade deficit with China, and the war that resulted – but there is also much to recall, and even to emulate.

Sheila Melvin is a newspaper columnist and author