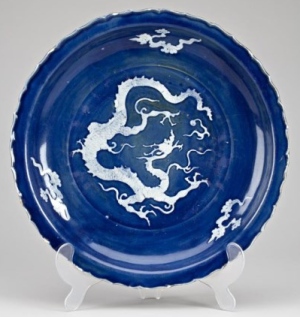 A rare Chinese charger plate estimated to be about 600 years old sold for more than $1 million at an auction in Ottawa on Wednesday.

The blue plate with a carved white, three-legged dragon was valued at $700 to $900 by Walker’s Fine Art and Estate Auctions.

“One only has the pleasure to witness something as rare as this, luckily, once in a lifetime,” said Walker’s president Jeffrey Walker. “It resonated with me. Not being a specialist in Chinese porcelain, of course we consulted with other experts and specialists … and the indication in the trade was that it was actually quite a spectacularly rare piece.”

A foreign bidder who flew to Ottawa for the auction and was sitting at the front of the room made the winning bid of $1,025,000. Bidding had started at just $300. His main opponent was someone bidding by phone.

The winner wants to remain anonymous, Walker said.
‘What an exciting moment it was’

“What an exciting moment it was,” Walker said. “… It was silence. You could hear a pin drop.

“You could feel the anticipation, and as the price climbed beyond $1 million, and then ultimately at $1,025,000 with the drop of the hammer, then full applause and smiles everywhere.”

Walker said the Chinese art market is hot, and that rich foreigners, especially the Chinese, want to repatriate their art.

The plate was the highest price ever paid for a single item at Walker’s. It was owned by Mrs. Waltraud Ellis, the widow of John (Jack) Ellis, a former MP. She died in June.

The plate had been owned by her grandparents and was handed down.

Ellis had wanted the plate to go to the Gardiner Museum of ceramic art in Toronto, but the museum’s mandate is Canadian pottery. Instead, the proceeds from the sale of the plate will go to Gardiner’s acquisitions program to buy pottery and ceramics.

“It’s nice to have a few of those every year,” he said with a laugh.