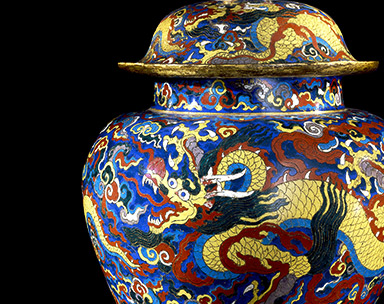 This major exhibition will explore a golden age in China’s history.

Between AD 1400 and 1450, China was a global superpower run by one family – the Ming dynasty – who established Beijing as the capital and built the Forbidden City. During this period, Ming China was thoroughly connected with the outside world. Chinese artists absorbed many fascinating influences, and created some of the most beautiful objects and paintings ever made.

The exhibition will feature a range of these spectacular objects – including exquisite porcelain, gold, jewellery, furniture, paintings, sculptures and textiles – from museums across China and the rest of the world. Many of them have only been very recently discovered and have never been seen outside China.

Neil MacGregor, Director of the British Museum said, “The political, social and cultural changes to China during the first half of the 15th century make this a remarkable story.”

He added, “New discoveries and research have led to a new perspective on this significant period that moves away from a Euro-centric view of China’s history.”

This period for China was a time of extraordinary engagement with the world and of fascinating cultural diversity.

China enjoyed a period of unprecedented global contacts from Kyoto to Mogadishu, through trade and diplomacy evidenced through gifts of gold, silver, paintings, porcelains, weapons, costume and furniture.

This is the first British Museum exhibition to explore the great social and cultural changes in China that established Beijing as a capital city and the building of the Forbidden City.

The exhibition will focus on the imperial court, as well as finds from three regional princely tombs: in Sichuan, Shandong and Hubei covering East, Southwest and Central China.

The exhibition will include the sword of the Yongle Emperor, the handwriting of the Hongxi emperor, the paintings of the Xuande emperor, and the portraits of the regents who ruled while the Zhengtong emperor was a boy.

There will also be costumes of the princes, their gold and jewellery, and furniture. The exhibition covers court life, the military, culture, beliefs, trade and diplomacy.

The exhibition covers a period when there was unprecedented contact with the world beyond the Ming Empire, through embassies, an assertive military policy, and court-sponsored maritime expeditions.

These contacts included the Timurids in Iran and Central Asia and the Ashikaga in Japan.

Contacts extended to Bengal, Sri Lanka, Africa, and to Mecca at the heart of the Islamic world.

The exhibition aims to replace older histories of China that over-emphasize contact with Europe after 1500 by highlighting complex and longer-lasting intra-Asian connections that played a key role in the formation of the Chinese state, society and culture.

At the same time, the exhibition will explore the diversity within the Ming Empire itself, and the idea that it is multiple courts, and not one single, monolithic, imperial court, that are important in this period.

The exhibition, which will be housed in the museum’s new Sainsbury’s Exhibitions Gallery, runs from September 18 to January 5, 2015.