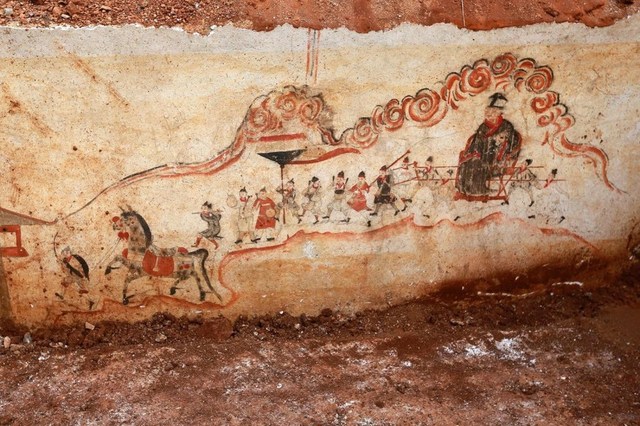 An ancient tomb was discovered at a construction site at Qunyi village in Loudi City, Hunan province on Tuesday while workers were paving the way for new roads. Several ancient Ming Dynasty paintings were also found after staff from the Cultural Relics Bureau were called in to dig at the site alongside the construction team.

A numbers of villagers gathered around to gawk, while nearly 100 policemen and militia were sent by the local government to “maintain public order”. Do they fear them making off with the extremely valuable paintings (worth at least $36 million or more, we reckon), or what? 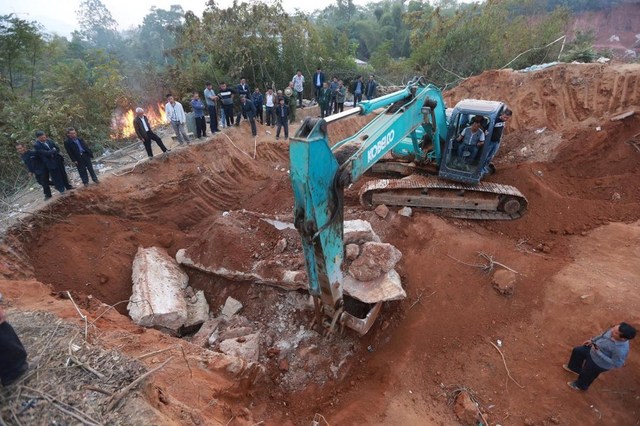 Remains such as skeletons were taken away after an excavator opened the body of the tomb. It was mainly built with limestone, measuring four metres long, 1.5 metres high and 1.5 metres wide.

After the body of the tomb was opened by an excavator, a lot of remains, such as skeletons, were taken away.

The body of the tomb that was mainly built with lime, which is four meters long, 1.5 meters tall and 1.5 meters wide.

The painting in the tomb bears a colourful cart as well as numerous figures, with a Buddha etched on the front end.

According to Liu Guoping, a descendant of the owner of the tomb, said that it belonged to Liu Shiyu who died in year 1568, Ming Dynasty.

Further investigations into the meaning of the paintings and the owner are yet to be conducted.