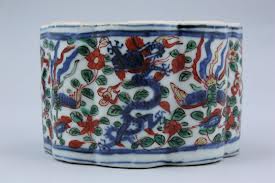 The Emperor Wanli ruled China from 1573 to 1620, towards the end of the Ming Dynasty period, which lasted for more than three centuries until 1644. During Wanli’s reign, porcelain makers increasingly produced pieces for the export market to European countries like the Netherlands, as well as for the thriving domestic market. The Dutch East India Company was responsible for much of the export trade, and pieces fetched high prices at auctions in the Netherlands.

This export ware consisted mainly of blue and white porcelain pieces and these often appear on the market today, in many cases comprising goods salvaged from shipwrecks. The pieces were produced by both the official Imperial and private kilns at Jingdezhen, in Jiangxi Province.

The blue and white glazed porcelain wares of the time came in a wide range of forms including vessels such as bowls, vases and incense burners. Decoration included geometric patterns, stylised flowers, fruiting branches and flowering stems. 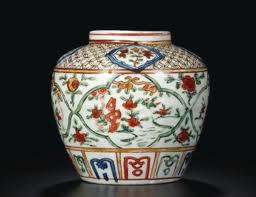 The Wanli period also saw production of extremely fine Wucai (five-colour) pieces, but these were not exported at the time and are rarely seen today except in museum collections. The finest polychrome porcelain of the era, painted in red, green, purple, yellow and black was produced under direct commission from Imperial courtiers and other members of the ruling elite.

The Wucai pieces were often decorated with narrative or allegorical scenes involving everyday Chinese life of the time as well as mythical tales. Painted scenes included landscapes and human activity as well as ornate decoration with animals, fish and flowers.