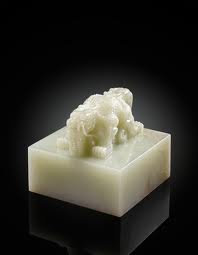 A Chinese Imperial jade seal and album of calligraphy are being re-offered for sale after their Asian bidders failed to pay.

The sales in France are the latest sign of auction houses clamping down on slow payments and nonpayments. Amid a growing appetite by wealthy Chinese for art, wine and other collectibles, sellers are demanding deposits by bidders on top lots and, in some cases, suing the non-payers.

Sotheby’s sales that were canceled on 19 lots between 2008 and 2011 amounted to about $22 million, according to court papers. The New York-based auctioneer started nine lawsuits in Hong Kong, naming successful bidders for the first time.

“We find it immensely effective,” said Kevin Ching, chief executive officer of Sotheby’s Asia. “It’s easy to get a default decision in Hong Kong but the cases often get settled before.” Most of the claims have now been settled, said Diana Phillips, a spokeswoman. 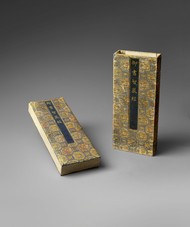 Olivier Doutrebente in Paris has put a valuation of as much as 1.2 million euros ($1.6 million) on a 35-sheet album of 18th- century Buddhist texts associated with the Emperor Qianlong, up for sale on March 30. The album, owned by relatives of the Sinologist Georges Soulie de Morant, was bid to 3.6 million euros by a Chinese buyer a year ago.

Chassaing-Marambat in Toulouse, France, auctioned a Qianlong-period white stone seal, surmounted by carvings of dragons, for 12.4 million euros to another Chinese bidder in March, 2011. It will re-appear on March 31 with a revised valuation of as much as 4 million euros. Only 2.2 million euros of the original bill has been paid, said Paris Asian-art specialist Pierre Ansas, who cataloged the piece.

“It will probably make less this time,” Ansas said. “Once we’ve made the sale, we’ll be suing the non-payer for the difference.”

Ansas required clients to deposit 200,000 euros to bid last March to bid on the seal and a Qianlong-period Imperial scroll. The scroll, offered on the same day at neighboring salesroom Labarbe, was bid to a record 22.1 million euros by another Chinese client and was paid in full.

Second time around, would-be bidders on the seal must give 3 million euros, effectively a guaranteed price based on the low estimate.

“We had to ask for a big deposit because we’re looking for safe bidding,” Ansas said. “There are also a lot of smaller cases of non-payment at around 100,000 euros at the moment. That’s actually quite a lot of money for the people concerned.”

Sotheby’s (BID) introduced a requirement last April that bidders on premium lots (the definition varies) must pay a deposit of HK$1 million ($128,791) to participate.

Public records don’t necessarily show all the twists and turns of the auction business. The prices for some disputed works in Sotheby’s lawsuits are listed on Artnet.com, the widely used database, as if the transactions have been completed.

“People accept it as fact and trade on this info,” said Beverly Schreiber Jacoby, a New York-based art appraiser.

Sotheby’s filed a lawsuit seeking payment for “Self Portrait in the Yellow Mountains,” an ink scroll by 20th- century master Zhang Daqian, which fetched HK$46.6 million and was the top lot of its sale on Oct. 4, 2011. Another writ was for a 1968 abstract painting by Zao Wou-Ki which fetched $8.9 million the day before. The price is listed as the auction record for the artist on Artnet.

Sotheby’s in all disputed lots was seeking the hammer price, buyer’s premium, interest and costs.

“The court of last resort is, literally, the courtroom,” said Victor Wiener, a New York-based art appraiser who has served as a witness in cases involving art sold at auction.

“It’s an international problem,” London-based dealer Roger Keverne said. “Some Chinese dealers are trying to sell things before they pay for them. We don’t know the full extent of it. The concern is that they can also be the under bidders. They push prices up. It isn’t a genuine market.”

The most prominent case is a Qianlong vase that was auctioned for a record 51.6 million pounds ($83 million) in London in 2010. Auctioneer Peter Bainbridge hasn’t responded to dealers’ assertions that the bill hasn’t been paid.